Cherprang Areekul, 22, seated second right, speaks to reporters at the Technology Crime Suppression Division in Bangkok after filing her complaint on Tuesday. (Photo by Wassayos Ngamkham)

She said it was not the first time this had happened. She decided to file a complaint because it was becoming more frequent and she wanted to protect her privacy.

Other members of the band had also suffered similar harassment, and some of them were still teenagers.

"I would like to thank fans for keeping me informed about such incidents and giving me moral support. I would like to tell the people who doctored the pictures indecently their actions show their state of mind. Please stop it," Ms Cherprang said.

Pol Col Siriwat Deepor, the division spokesman, said the offence carried a jail term of up to three years and/or fine of 200,000 baht. Anyone who made negative comments about the incident could also be prosecuted, he said. 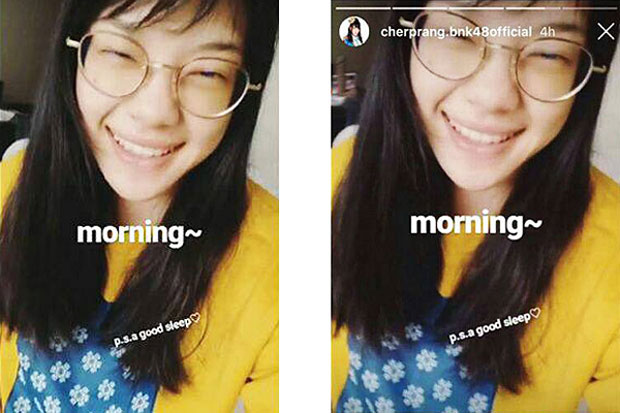 A still captured from the original video is on the left and the doctored photo is on the right. (Photos supplied)