Rescue workers retrieve dead and injured victims from the wreckage of a taxi involved in a crash with a pickup truck in Kanchanaburi's Sai Yok district in the early hours of Saturday. (Photo by Piyarach Chongcharoen)

KANCHANABURI: Four people, including Thai and Myanmar drivers and an Iranian tourist, were killed and another badly hurt when a pickup truck crashed head-on with a taxi in Sai Yok district in the early hours of Saturday.

Police and rescue workers rushing to the scene found a taxi with Bangkok licence plates and a single-cab pickup truck with Nakhon Ratchasima licence plates. Both were badly damaged.

Three people died at the spot and two others were seriously hurt. All were trapped in the wreckage of the two vehicles.

The three dead people were Ms Rinphu-on Jongkol, 46, the taxi driver; Ms Kantamanee Konnakhon, 28, a Thai taxi passenger of Tak’s Mae Ramat; and a Myanmar man identified only as Khwanchai of Sai Yok district, who drove the pickup truck.

A police investigation found the taxi was on the way to send the Thai woman and the Iranian tourist to a resort in Sai Yok district. When the taxi arrived at the scene, the pickup truck travelling in the opposite direction suddenly rammed into it.

Police would interrogate more witnesses and the injured man, Mr Korawit, to find out the cause of the crash. 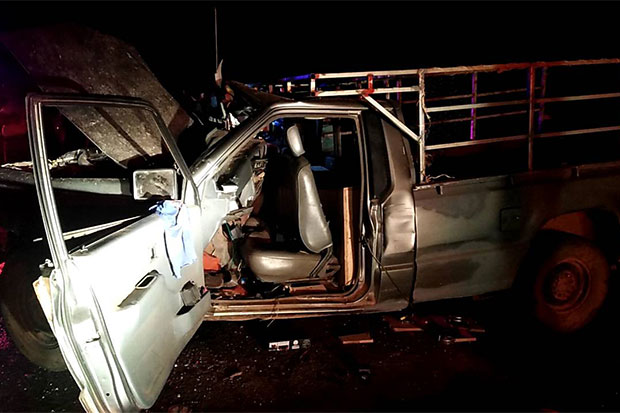 The Myanmar driver is killed and a Thai passenger badly hurt following the crash in Kanchanaburi. (Photo by Piyarach Chongcharoen)