Police escort suspect Pipatpongpat Suksawatpipat, 59, for a crime re-enactment at a shop in Bang Rak district on Saturday morning. The former jewellery trader was arrested in Chanthaburi while trying to flee to Cambodia. (Photo from @Policenewspage Facebook page)

The man charged with luring an Indian trader to a fake shop and then stealing a 10-million-baht diamond is a former jewellery trader in Chanthaburi who had closed his business due to losses and gambling addiction, police say.

Police on Saturday took Pipatpongpat Suksawatpipat, 59, for a crime re-enactment at the Bangkok storefront that he had rented for the sole purpose of carrying out the theft.

The suspect had been apprehended the day before at an immigration checkpoint in Chanthaburi while trying to flee to Cambodia with his wife.

The heist occurred at a shop on the first floor of a four-storey commercial building on Soi Song Phra off Si Phraya Road around 3pm on Tuesday. Mr Pipatpongpat had lured an Indian gem broker to the shop, which he had arranged to rent only the previous week.

Vaibhav Jain, 44, and a Thai friend arrived with a 10-carat diamond they reportedly had advertised for sale online.

After seating them in the shop, Mr Pipatpongpat said he wanted to examine the stone in natural light. He walked outside the shop, then closed and locked the glass door behind him and took off on a waiting motorbike, leaving the two men trapped inside.

Mr Jain sustained severe lacerations breaking the glass door with his fist to get out, but was too late  to stop the thief escaping.

Deputy national police chief Chalermkiart Srivorakhan said the suspect was a former jewellery trader in Chanthaburi. At one time he was quite wealthy and was well known in local diamond trading circles as “Sia Ae”. He later became heavily addicted to gambling and faced huge business losses that caused him to close his business, said Pol Gen Chalermkiart.

Police said the suspect, who had only 40,000 baht, wanted to make some quick money for gambling. He spent 10,000 baht to rent the shop and another 20,000 baht to install an automatic glass door, and then hired a Cambodian worker in Chanthaburi to ride a motorcycle to help him flee.

During the interrogation, the suspect claimed he had already sold the stolen diamond to a Vietnamese national he knew at a casino for 500,000 baht. He told police that he had given 100,000 to someone to help him flee and planned to spend the remaining 400,000 baht to gamble at a casino in Cambodia. He claimed he had hatched the plan alone, police said.

As soon as he was nabbed, the suspect shouted, “The game is over,” Thai media reported.

Police are still seeking two accomplices, who have not been named. 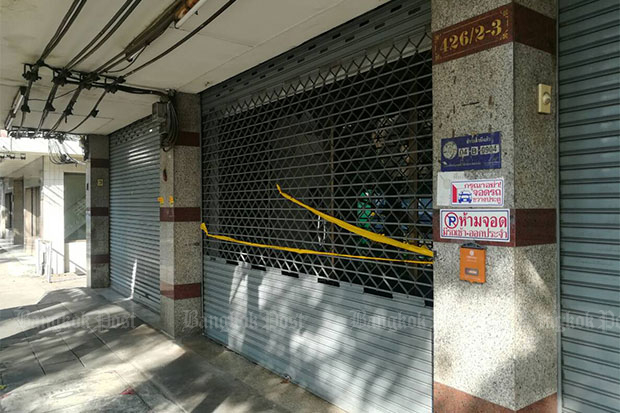 The shop rented by the theft suspect to lure an Indian gem broker is cordoned off. (Photo by Nittaya Nattayai) 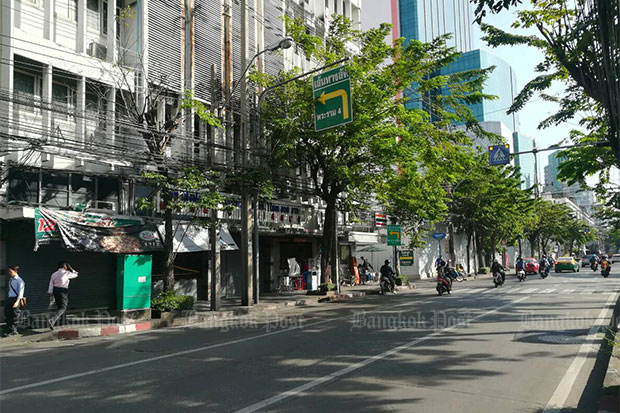 The shop (behind the green telephone junction box) rented by the suspect is located a one-way road in the Si Phraya area of Bangkok.(Photo by Nittaya Nattayai)