The fire broke out at Biko Prachinburi (Thailand) Co in tambon Tha Thum, said Pol Capt Kittsak Sinthorn, a duty officer at the Sri Maha Phot police station, who was alerted at 9.30am.

Ten fire trucks were deployed to the site inside the 304 Industrial Park. Black smoke poured from the building, sending more than 100 workers to flee for their own safety. A man and a woman were rushed to a local hospital to be treated for smoke inhalation.

Firefighters took more than three hours to bring the blaze under control. Police believe the fire, which started in the parts production area, might have been caused by an electrical short circuit.

Pol Col Nawin Sonthirat, chief of the Sri Maha Phot station, said forensic investigators would collect evidence to help establish the exact cause of the fire.

Prachin Buri governor Piboon Hatthakitkosol said all workers were evacuated safely from the factory. Biko Prachinburi is the local affiliate of Japan-based Biko, which specialises in injection-moulded auto body parts, lighting components and other parts. 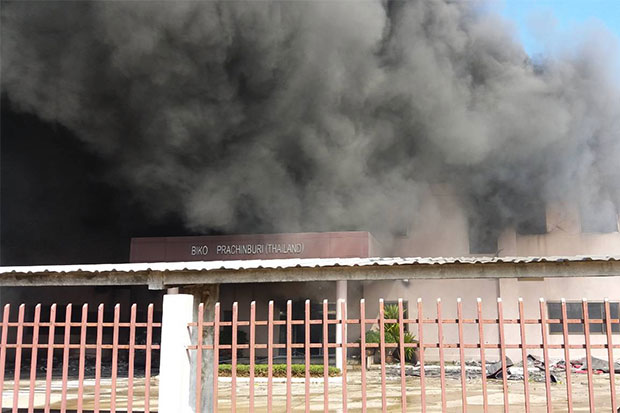