Nitiyaporn Srisalai, 22, was found dead, hanged in her rented room in Muang district of Ratchaburi province on late Monday night. But her parents doubt she committed suicide. (Photo supplied).

RATCHABURI: The parents of the World Muay Thai women's champion found hanged in her rented room on Monday suspect it was murder, saying a rope mark on her neck is too low.

After arriving from Roi Et province, Suriyant Srisalai, 51, and his wife Kingkaeo, 48, expressed their doubt that 22-year-old Nitiyaporn Srisalai, a fourth-year student, committed suicide when they received her body at Ratchaburi Hospital late on Tuesday.

The rope mark on her neck should have been high if she had hanged herself from the upper door frame in her rented room. Instead there were two rope marks on her neck and one of them was low, as if she had been strangled while lying down, the father said.

Going by police photographs taken in the room, Mr Suriyant said, the chair which she allegedly stood on before hanging herself was too close to her body.

These inconsistencies suggested she was murdered, he said.

He also said that although Nitiyaporn had a boyfriend, a man aged about 50 had approached and bothered her.

Charnchai Yomadit, president of the International Muay Thai Study Association, said Nitiyaporn's death was a great loss to the Muay Thai circle in Thailand. She was the World Muay Thai Organisation women's champion in the 51-kilogramme division and was about to graduate in her Muay Thai studies at Muban Chombueng Rajabhat University in Ratchaburi.

Mr Charnchai, who head of the Muay Thai curriculum at the university, said Nitiyaporn had planned to teach Muay Thai in China after her graduation. 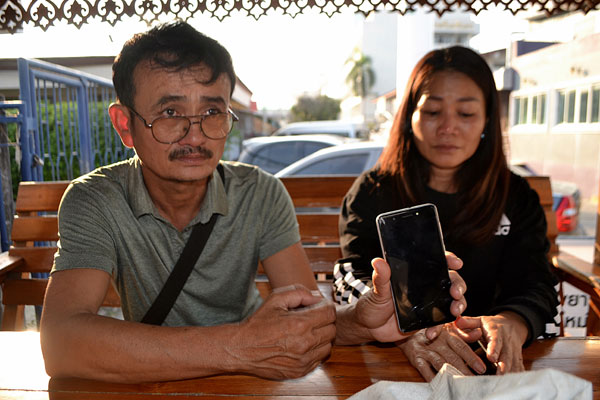 Suriyant Srisalai and his wife Kingkaeo express doubts  about the death of their daughter, while showing a picture to support their stance, in Ratchaburi province on Tuesday. (Photo by Saichol Ochkajon)