Pedestrians wear masks to filter pollution after the Pollution Control Department warned that levels of PM2.5 dust particles exceed the safety limits in many areas of Bangkok and neighbouring provinces. (Photo by Pattarapong Chatpattarasill)

The hazardous ultra-fine dust that has been sweeping through 20 districts of Bangkok will last for a few days, City Hall's Environment Department warned on Friday.

The warning corresponded with dust levels measured by the Pollution Control Department (PCD) which started issuing alerts on Thursday.

With a size of up to 2.5 micrometres in diameter, the airborne particulate matter (PM) can easily lodge in the lungs.

Normal face masks do not work effectively, as PM is smaller than the width of a single human hair. Instead, a KN95 mask is required.

"People should not panic," PCD director-general Pralong Damrongthai said, even though the PCD yesterday measured levels of PM2.5 at between 65 and 103 microgrammes per cubic metre (µcg) in its 24 dust measurement stations across the capital. The acceptable standard is 50 µcg.

People at severe risk include children, the elderly, pregnant women and persons with congenital diseases, he said.

"The situation is expected to return to normal within two or three days," Mr Pralong said, urging Bangkok residents to follow the department's air quality update via the Air4Thai mobile application.

However, Bangkok governor Aswin Kwanmuang warned people in risk areas against outdoor activities. If going outside is necessary, face masks are essential, he said. 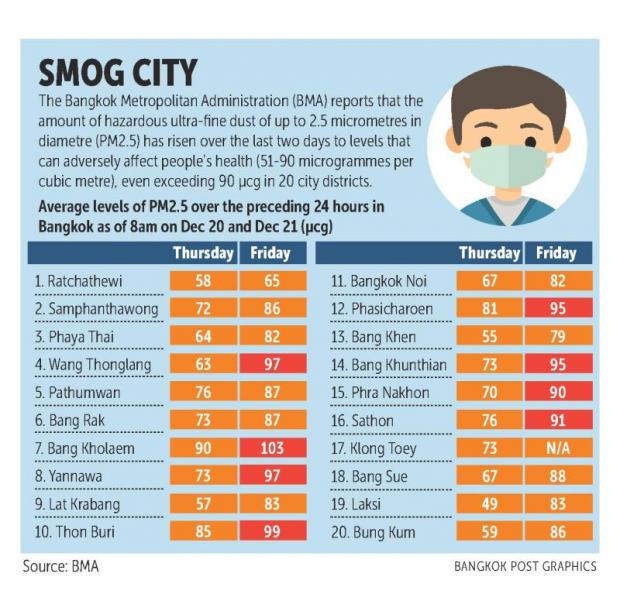 Pol Gen Aswin twice posted warnings on his Facebook page on Friday to provide updates on the situation, telling his followers the cause of the problem and what the city has done to solve it.

"I've ordered the Environment Department and 50 districts to look into and solve the problem immediately," he wrote in his second post.

City workers will spray water to clean roads more frequently, the governor said. Other measures include a ban on parking cars on main streets and impounding vehicles which emit black fumes.

Many roads in the 20 dust-hit areas sparked fresh concerns among city officials on Friday after PM2.5 levels exceeded the safe limit.

The areas include the Royal Jubilee Gate near Bangkok's China Town, Chamchuri Square near congested Rama IV Road and a bus top near the Mahai Sawan Intersection where the Somdet Phrachao Taksin and Ratchadaphisek roads cross on the western side of the Chao Phraya River.

Other areas prone to pollutants are mainly the compounds of district offices, including Phra Nakhon, Klong Toey and Bang Sue.

"We have to admit the truth," Pol Gen Aswin said.

The PCD described the current weather situation in Bangkok as "closed and stagnant", which has caused PM2.5 to accumulate in the air.

According to Mr Pralong, the dust was not only detected along streets, but his department also measured harmful amounts in what he called "general areas", with a maximum level of 96 µcg.

US House of Representatives Speaker Nancy Pelosi has visited Taiwan in defiance of strong opposition from mainland China, and it is shaping up to have far-reaching implications for trade.

The Central Tax Court has ruled in favour of former prime minister Thaksin Shinawatra, saying he doesn't owe 17 billion baht in tax over the 2006 sale of a stake in Shin Corp.