The popular mermaid sculpture lost its tail to a bomb explosion on Samila beach in Muang district of Songkhla province on Wednesday night. (Photo by Assawin Pakkawan)

SONGKHLA: Samila beach in Muang district remained closed to the public on Thursday after two bombs exploded there on Wednesday night. No casualties were reported.

Deputy Prime Minister Prawit Wongsuwon was quick to announced the beach bombs were politically motivated and that southern insurgents might have been used to plant them.

Police insisted that was not the case, and it was most likely motivated by business conflict in the trade and tourist sectors.

The explosions were reported about 10.30pm on Wednesday but security authorities did not inspect the beach until Thursday morning, for fear of being attacked.

The explosions caused  some damage to two sculptures symbolic of the beach and Songkhla province - the mermaid, and the cat and mouse - which sit on the beach about 200 metres apart. The mermaid lost her tail.

They closed the beach and nearby Ratchadamnoen and Chalatat roads to the public.

Authorities believed the bombs were placed on the beach on Wednesday night after all tourists left.

Security sources blamed the bombings on the Barisan Revolusi Nasional insurgent group. They said its leaders had just met at a school in Songkhla's Chana district and local authorities had been alerted to a possible attack in the area.

Bombings at the mermaid and cat and mouse statues were clearly aimed at the tourism sector economy, the sources said. Tourists from Indonesia, Malaysia and Singapore loved having their photos taken with the sculptures.

The explosions could also be a response to recent operations against smugglers bringing in goods of interest to southern insurgent groups, the sources said. (continues below) 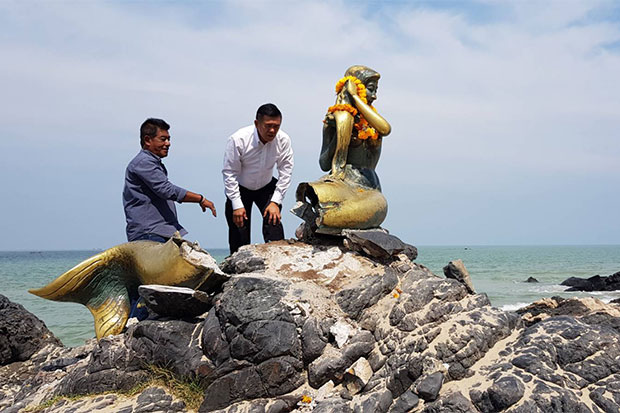 They were likely linked to business disputes, he said.

Police investigators were looking into conflicts in the trade and tourist sectors as possible motives, Pol Lt Gen Ronnasil said.

He stood firm in his belief the explosions had nothing to do with politics.

After inspecting the scene, there were two bombs, not five as originally thought, found on the beach - one exploded at the mermaid sculpture and another one at the cat and mouse sculpture. The remainder were suspicious objects, components of the two bombs, the police commander said.

Maj Gen Jatuporn Klamphasut, deputy director of the Internal Security Operations Command (Isoc) Region 4, said authorities have not yet drawn a conclusion what was behind the explosions on the beach, or which southern insurgent group was responsible.

Local tour guide Jeerawat Nawang said Malaysian and Singaporean tourists had flocked to Songkhla since the start of the Malaysian school holidays last month, but their numbers were now already falling off. 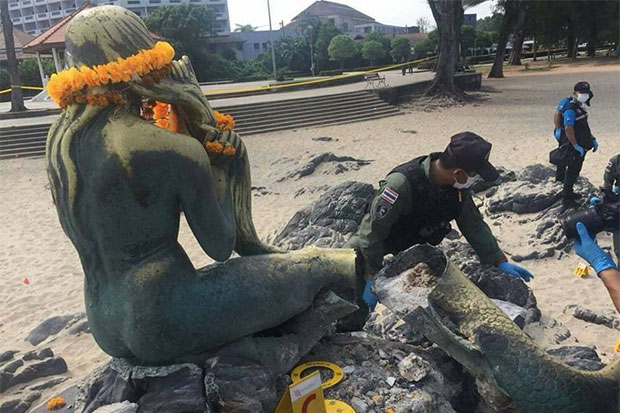