Samui, Phangan residents stock up ahead of storm Pabuk

Vessels at anchor in Surat Thani on Thursday, ready for storm Pabuk, as clouds cover the southern region. (Photo by Supapong Chaolan)

SURAT THANI: Residents and tourists on Koh Samui and Phangan are stocking up on food and petrol ahead of storm Pabuk, with boat services linking the islands and mainland to be suspended.

People flocked to markets on Samui on Thursday morning, buying meat, vegetables and other necessities after being informed of the storm about to hit the island.

"I have sold almost all of my vegetables," Thanita Somwong, a vendor at Lipa Noi market said. "I, myself have stockpiled food at home."

Kanya Ruengsuk, a butcher at the market, said buyers bought more pork than usual on Thursday after they realised the ferry service would be suspended on Thursday.

Motorists have been filling up at petrol stations on Koh Samui and Koh Phangan since Wednesday, fearing a shortage if the sea connection with the mainland is cut off.

Twitter accounts also showed local and foreign shoppers stocking up at markets, supermarkets and convenience stores on the island. Many were leaving the islands before the boat service is suspended. (continues below). 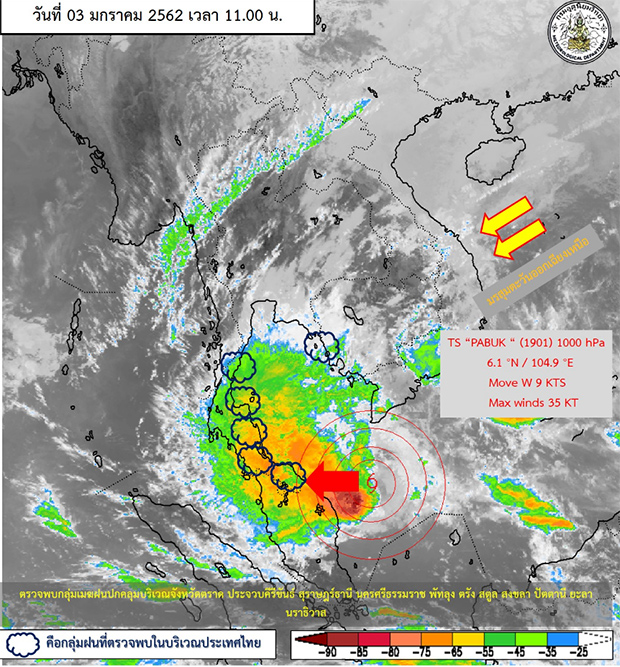 A radar weather map at 11am on Thursday shows rain from storm Pabuk will blanket the southern region. (Photo: Thai Meteorological Department)

Koh Phangan district chief Krirkkrai Songthni said all people living by the shore had been advised to move to higher ground at Koh Phangan Suksa School, which was set up as a temporary shelter. Swimming was now prohibited at all beaches on the island because of the approaching storm, he added.

Ferry services between the islands and mainland will be suspended, starting Thursday. Raja Ferry is the latest to announce the cancellation of the boat leaving at 10.30pm on Thursday. All boats will be kept in port on Friday and from 5am to 10am on Saturday.

Seatran's last ferry will leave Koh Samui and Don Sak at 1pm on Thursday, with full services scheduled to resume on Sunday.

People living by the coast in other provinces have evacuated their belongings and boats for safety. (continues below) 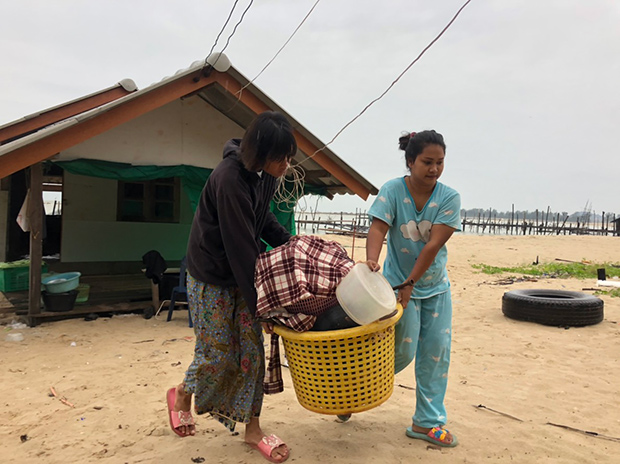 People in Songkhla evacuate from the coast on Thursday. (Photo by Assawin Pakkawan)

Strong winds were gathering pace in southern provinces after calm seas on Thursday morning. The latest warning from the Meteorological Department at 5am on Thursday confirmed the storm will move through Nakhon Si Thammarat on Friday night.

It will affect the South from Thursday to Saturday, with widespread rainfall, strong winds and some torrential downpours. People should beware of the severe conditions.

Pabuk is moving on a northwesterly track and is expected to leave the Andaman coast on Sunday, the weather office said.