The district chief of Pak Phanang in Nakhon Si Thammarat has issued a maximum alert for the approaching Pabuk as it gains speed.

The tropical storm unleashed heavy rain and gusty winds along its path in southernmost provinces, including Pattani and Songkhla, on Thursday night, causing floods in some areas.

Pak Phanang district chief Kriengsak Raksrithong on Friday told all officials to be fully prepared for Pabuk, which forced people to leave home for shelters in the district municipality.

The main shelter at the municipality was already packed with about 1,000 evacuees. More locations, including the district office and schools, have been prepared to accommodate more people.

The latest warning of the Meteorological Department at 9am said Pabuk was moving faster, with maximum winds of 80km per hour, up from 75 km/h from its previous 5am monitor. The storm is moving at a speed of 25 km/h and could reach Laem Talumpuk in Pak Phanang earlier than previously forecast.

The department expected in the update on Friday morning that the storm could reach the mainland "in the evening" of Friday, instead of Friday night as previously predicted. (continued below)

Pak Phanang, shown in red, is where Tabuk is forecast to make landfall, with Laem Talumpuk at its tip. (Google Maps)

Laem Talumpuk is where the storm will make landfall. It was the same area hit by a tidal wave in 1965 which claimed over 500 lives. 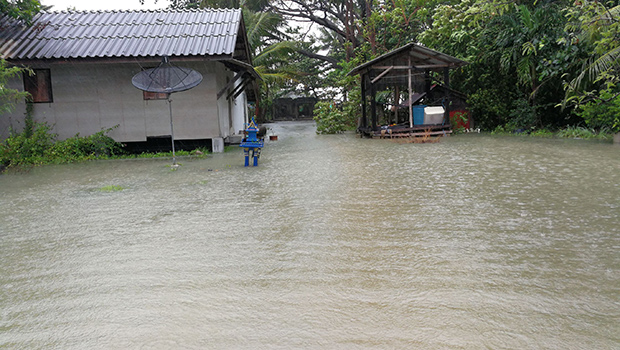 Ban Pak Trae in Ranot district of Songkhla is one of the seaside villages flooded on Friday after overnight downpours. (Photo by Assawin Pakkawan)

Some coastal villages in Pattani and Songkhla were flooded and the heavy rainfall has started to cause the Pattani River to overflow.

Songkhla authorities are focusing on Ranot as the district could be hit the hardest due to its location neighbouring Nakhon Si Thammarat. Around 300 people living in Ranot and two other coastal districts of Sathing Phra and Thepha have already moved to shelters.

The Airports Department issued a statement about the southern gateways Friday afternoon.

Surat Thani airport closes from 4pm on Friday to noon Saturday. As a result, nine flights were cancelled -- two of Nok Air, four of Thai Smile and three of Thai Lion Air.

Tourists marooned on southern islands hunkered down Friday as Pabuk edged closer, forcing airports and ferries to close and bringing downpours and massive sea swells hours before its expected landfall, according to AFP.

Boats were recalled to shore across the Gulf of Thailand, while two key airports -- Koh Samui and Nakhon Si Thammarat -- were shut until Saturday, leaving tourists who remain on islands now cut off from the mainland.

"Ten thousand tourists are still on Koh Phangan," said Krikkrai Songthanee, district chief of the island which neighbours Samui and is famed for its full-moon party.

"But I talked to foreigners last night and they are not scared, they understand the situation," he told AFP.

After making landfall on Friday evening, Pabuk will pass over Nakhon Si Thammarat further to the south.

"But all tourist islands in the Gulf of Thailand including Koh Samui, Koh Phangan, Koh Tao will be affected because Pabuk is huge," said Phuwieng Prakhammintara, head of the Thai Meteorological Department.

As it churns through the sea, Pabuk has picked up speed with 75 km/h winds stirring huge waves of up to 5m.

With rains lashing the entire south, the Meteorological Department warned coastal communities to expect "inshore surges" as winds whip up the sea.

Pabuk is forecast to pass over the narrow neck of land between the Gulf of Thailand and into the Andaman Sea -- home to the tourist resorts of Phuket and the Similan National Park, a diving paradise. (continues below)

Tens of thousands of tourists have already fled the southern zone.

On neighbouring Koh Tao, one of Southeast Asia's most popular dive spots, tourists and residents were bracing for a torrid 24 hours ahead.

"The weather is turning worse as the winds pick up, I've finished buying supplies... there's no gas anywhere on the island, 7-Eleven is already running out of things," a Spanish dive instructor told AFP.

"We're ready to bunker down."

Flights into Surat Thani, the gateway to Koh Samui, were nearly empty on Friday morning, a rare sight in the lucrative peak holiday season.

The economy is heavily reliant on tourism, with the latest figures for 2017 showing the kingdom made nearly $60 billion from the sector.

Tourism was hit hard by a boat accident in Phuket in July last year when scores of Chinese tourists died as their overcrowded boat capsized in heavy seas.