Fallen electricity poles are seen along a road in Muang district of Nakhon Si Thammarat on Friday. (Reuters Photo)

Parts of Nakhon Si Thammarat have suffered heavy damage from tropical storm Pabuk but officials expect to downgrade the storm to a tropical depression as it moves further inland on Saturday.

Flooding was widespread in Pak Phanang district, where the first tropical storm to strike Thailand in more than three decades made landfall just after noon. Some buildings were damaged and electricity poles were blown down  along a 500-metre stretch of the main road to Muang district, resulting in power cuts in some areas.

Several trees were also felled by gusty winds, and water was as up to 100 centimetres deep in some places.

The Meteorological Department said Pabuk was moving northwest at 18 kilometres per hour, with maximum winds at the centre of the storm recorded at 75kph. (continues below) 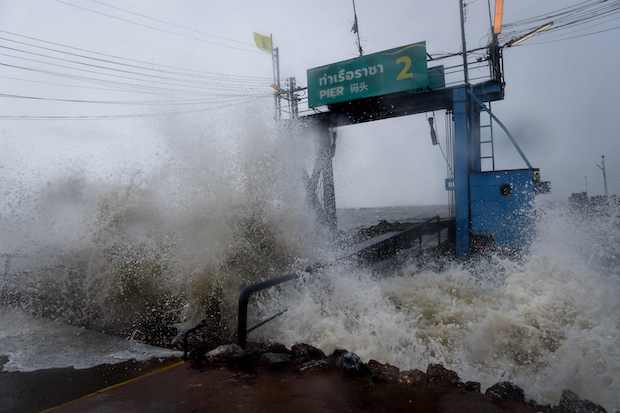 Waves whipped up by tropical storm Pabuk crash into a pier in Surat Thani on Friday. (AFP Photo) 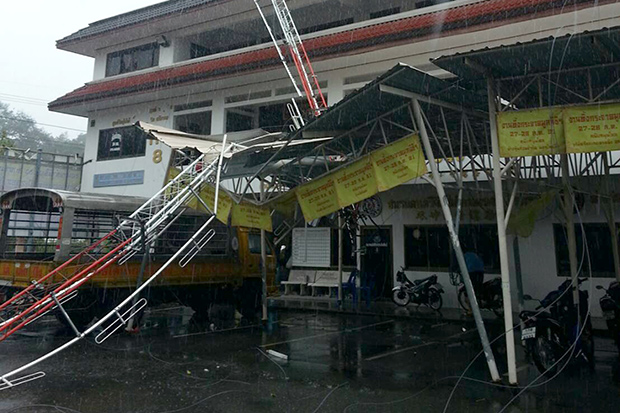 A building in Pak Phanang district in Nakhon Si Thammarat is damaged by tropical storm Pabuk on Friday. (Photo by Sakulrat Sukanant)

“The storm came faster than we expected,” Meteorological Department director-general Phuwieng Prakhammintara said at a briefing on Friday afternoon.

With Pabuk starting to move more slowly as it encounters hilly terrain, the department is concerned about lingering downpours that could cause more accumulated rainfall, flash floods and water runoff for districts near basins and mountains in Nakhon Si Thammarat and Surat Thani late Friday night or early Saturday.

“I am seriously worried about possible runoff,” Mr Phuwieng said. “Officials should be on duty around the clock tonight to monitor the situation.”

He expects the storm will move across the southern region to the Andaman coast on Saturday and then leave the country.

“I can’t specifically say when but it will leave the country sometime during the daytime on Jan 5,” he said.

Pak Phanang in Nakhon Si Thammart is flooded as tropical storm Pabuk is reaching the district. (Video by Sakulrat Sukanant)

The centre of the storm was moving over Tha Sala district on Friday night before entering Surat Thani. Authorities expect to downgrade the storm to a depression before it leaves the southern region and moves into the Andaman Sea.

Nevertheless, the department warned that heavy rain and strong winds would continue in all southern provinces, while the central provinces of Phetchaburi and Prachuap Khiri Khan could expect gusty winds on Saturday.

In Phuket, authorities were preparing shelters that could accommodate as many as 22,000 people, including stranded tourists evacuated from several islands in the Andaman sea on Friday.

Across the Gulf of Thailand, ferry services were cancelled, all boats recalled to shore and three key southern airports closed, leaving tourists who remain on islands cut off from the mainland.

“But I talked to foreigners last night and they are not scared, they understand the situation.”

Earlier as it churned through the Gulf, Pabuk stirred huge waves up to five metres high.

There are fears that the storm will be the worst to hit the country since 1989, when Typhoon Gay left more than 400 people dead. A tropical storm in 1962 killed more than 900 people in the South.

Only one reported fatality has been linked to the storm so far. One fisherman died and another was still missing, but four made it safely to shore after their trawler sank in storm-tossed seas off the coast of Pattani early on Friday.