The 14.6-billion-baht Korean-built frigate HTMS Bhumibol Adulyadej, formerly known as HTMS 'Tachin', has a storage displacement of 3,700 tonnes, a maximum speed of 30 knots and a range of 4,000 nautical miles.

It was a day of overwhelming joy for the navy when Government House informed them early this month that two new ships were named by His Majesty the King in remembrance of the late King Bhumibol.

One of the vessels, a new 14.6-billion-baht frigate built in South Korea, was given the name HTMS Bhumibol Adulyadej. The ship was formerly known as HTMS Tachin.

The other, an offshore patrol vessel (OPV) scheduled to be completed later this year, was given the name HTMS Prachuap Khiri Khan, where Klai Kang Won palace is located. The OPV was earlier expected to be named HTMS Trang.

When the news broke, the former HTMS Tachin was heading to Thailand from Busan via Hong Kong and Da Nang in Vietnam. A ceremony marking the delivery of the ship took place at Daewoo Shipbuilding & Marine Engineering (DSME) in December before the ship departed for Thailand on Dec 22.

"We learned [about the new name] on our way home. We were all overwhelmed. We never thought the vessel would be given a name that means so much," said Capt Samitnat Kunnawat, the frigate's commanding officer.

Capt Samitnat and the crew spent over a year in South Korea to familiarise themselves with the frigate.

Before he was assigned to HTMS Bhumibol Adulyadej, Capt Samitnat was the commander of a Tor 11 patrol vessel, and HTMS Makut Rajakumarn.

"The name has been given by His Majesty the King and it means so much to the Thai people. This encourages us to do even better and to ensure the vessel fulfils its obligations," he said.

After the name change was established, a new name plate was produced and attached to the ship once it entered Thai waters on Jan 5.

The welcoming ceremony was held on Monday in Chuk Samet, Chon Buri's Sattahip, and presided over by navy chief Adm Ruechai Ruddit.

The new frigate, which is a further developed version of the Gwanggaeto the Great-class destroyer, will be the 10th of the 1st Frigate Squadron, Royal Thai Fleet. 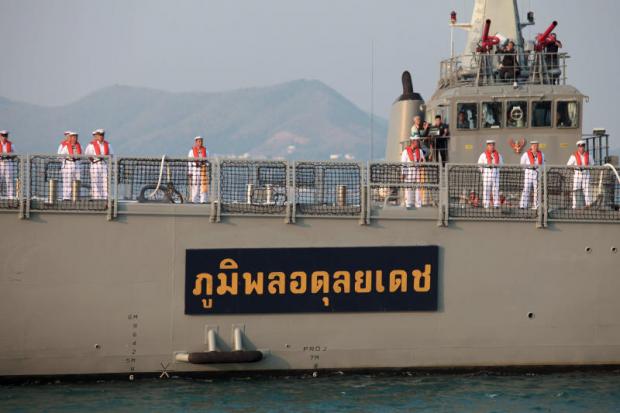 Addressing the crew during the welcoming ceremony on Monday, Adm Ruechai urged them to be prepared for the responsibilities that lie ahead.

The meaning of its auspicious new name fits the vessel, said to be the most advanced frigate in the navy; Bhumibol means the power of the land while Adulyadej means incomparable mightiness.

Equipped with DW-3000F class stealth technology and built to the standards of both the US military and South Korean navy, the multi-role stealth frigate is intended to protect Thailand's marine sovereignty, ensure security along marine transport routes and engage in rescue operations.

It is expected to support anti-aircraft, anti-surface ship and anti-submarine naval missions.

Designed with an anti-submarine capability, the frigate is capable of detecting distant targets with a towed array sonar and attack submarines with torpedoes and long-range weapon systems.

The vessel can also be used in joint operations along with other ships in the navy's fleet, including HTMS Chakri Naruebet and HTMS Rattanakosin.

It sails with a 141-man crew, has a storage displacement of 3,700 tonnes, a maximum speed of 30 knots and an operational range of 4,000 nautical miles.

The navy signed an agreement with DSME in August 2013 to build the frigate and transfer related technologies.

A second frigate is expected to be built locally.

HTMS Prachuap Khiri Khan, formerly known as HTMS Trang, is being built at the Mahidol Naval Dockyard of the Naval Dockyard Department in Chon Buri's Sattahip.

The OPV, which is expected to be commissioned later this year, is designed to be armed with guided missiles and the shipbuilding costs are estimated at 5.5 billion baht.