Man hunted for murder of his wife and four in-laws

UTTARADIT: Police were on Monday hunting a man they allege shot dead his wife and four in-laws on Sunday before fleeing and changing vehicles in another province.

Teerapon Pinamon, 37, is accused of first using a pistol to shoot dead his mother-in-law, Namphueng Kingkaew, and her two elder sisters, Nampha and Kanokwan Inthasit, at a house in Pichai district in Uttaradit.

He then went to another house where he is accused of killing his wife, Kanyarat Kingkaew, and his father-in-law, Wirat Kingkaew.

Two other people were also wounded at the second house.

The murders were reported to police around 5.45pm on Sunday.

Mr Teerapon drove away in a Toyota Camry sedan. Police followed his movements by tracking his mobile phone signal until 11.30pm, when it suddenly shut down.

The Camry was found on Monday at a hotel in Muang district of Phitsanulok province.

Pol Lt Col Nonthaworn Seein, the deputy chief of Muang police station in Phitsanulok, said a man identified as Mr Teerapon had borrowed a motorcycle from a hotel maid, saying he was going to a department store, and had not returned. The suspect could be making his escape on the motorcycle, he added.

The motives behind the shocking murders were unclear.

"Mr Teerapon may have suspected his wife was planning a reunion with her former husband,"  he said. Eyewitnesses confirmed the shooter was Mr Teerapon, he added.

A video clip seen by the Bangkok Post showed Mr Teerapon having words with his wife before pulling a pistol and shooting his father-in-law and then her. (continues below) 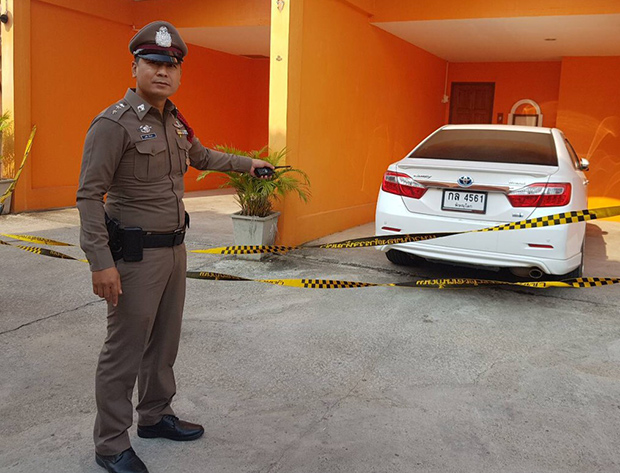 Pol Col Thapset said it was believed the suspect was trying to make his way back to his home province, Ranong.

The Uttaradit Court has approved an arrest warrant for the man and pictures of him have been circulated to police units across the country.

A background check by police found he had five vehicles, including the Toyota he used to flee.

He was fined 2,000 baht in 2015 by the Land Transport Department for ordering the passengers to leave a No.46 bus he was driving in Bangkok.

He had applied for an ID card on 10 occasions in several provinces between 1979 and April last year.

Pol Col Thapset said Mr Teerapon was released from jail after serving time for drugs before he met his wife. Witnesses said he told his wife he had made a lot of money investing in stocks.