SONGKHLA: A human-trafficking Myanmar suspect walked free from his cell at a police station in Bang Klam district on Thursday as it was locked only with handcuffs.

Police at the station found from surveillance camera footage that Zaw Win, 27, walked leisurely out of the police station at about 12.30am when there was no policeman in front of the cell.

Police said that the suspect could open his cell because it was locked only with handcuffs. At the time, policemen were rushing into questioning other suspects who would have to be brought to court for detention extension in the morning. 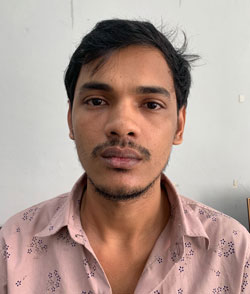 The Myanmar man arrived at the police station from Bangkok on Wednesday evening for human-trafficking prosecution.

He was arrested in the capital after 14 Rohingya and Myanmar illegal migrants were found in a forest in Moo 6 village in tambon Tha Chang of Bang Klam district on Jan 1.

Mr Zaw Win is 165cm tall, speaks Thai and walks with a limp. He wore a T-shirt with blue stripes, black jeans and a black cap.