Rahaf Mohammed al-Qunun, an 18-year-old Saudi woman who fled her family, is pictured in the United Nations High Commissioner for Refugees (UNHCR) building in Bangkok on Jan 11, 2019, before leaving for the airport, after she was granted asylum in Canada. (Khaled Ibrahim/UNHCR/Handout via REUTERS)

On a television set in a grim, overcrowded Bangkok detention centre refugees closely followed Saudi woman Rahaf Mohammed al-Ms Qunun's quest for resettlement, as the 18-year-old asylum-seeker's case spurred hopes of a major policy turn from Thailand -- a country that does not recognise refugees.

Ms Qunun fled her family to Bangkok, barricaded herself in an airport hotel room and staved off deportation with her Twitter feed, ultimately gaining refuge in Canada on Jan 12.

But in the days since they have promised to address some of the lingering issues of indefinite detention and deportation of asylum seekers.

On Monday authorities signed an MoU to end the detention of all child refugees and asylum seekers.

It was welcomed by the UNHCR as a "positive example" of the kingdom's increasingly humane approach to the issue.

Rights groups have for years condemned Thailand, which is not a signatory to the UN's convention protecting refugees, for its hostility to asylum seekers -- often trapping them on a carousel between detention and work in the black economy.

An estimated 900 adults remain in grubby immigration detention centres (IDCs) hoping to be resettled like Ms Qunun but fearing an endless extension to their months, or years, of limbo.

Nazir, a Pakistani-Christian in Bangkok's biggest IDC, said he watched Ms Qunun's case unfold on the news, discussing the twists and turns with his wife over the phone.

He shook his head in amazement at the "days" it took for Ms Qunun's refugee status to be determined by the UNHCR before Canada stepped in with the asylum offer, while he has been locked up for several months.

"My wife is alone with my daughter outside.. they are very sad," Mr Nazir, whose name has been changed to protect his identity, told AFP. 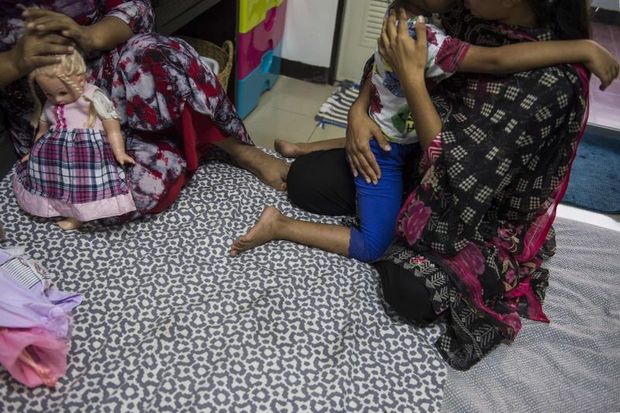 Shamim, a Pakistani-Christian asylum seeker, holds her daughter beside a family friend at their apartment in Bangkok on Jan 12, 2019 while her husband Nazir remains detained at Thailand's immigration detention centre. (AFP photo)

Despite the hard line to asylum seekers, Thailand's lax visa rules, multiple entry points and graft-prone officials have made it an easy staging-post for those escaping conflict, persecution and poverty.

The kingdom wants that reputation to change.

But in the wake of Ms Qunun's case immigration police chief Surachate Hakparn has also vowed to recalibrate the detention policy, saying the kingdom will no longer deport anyone "involuntarily".

Knocking the issue over to the UNHCR, which finds countries to resettle asylum seekers, Pol Lt Gen Surachate says the agency must speed up its processes.

"Otherwise they have to live in anxiety and spend six to seven years (here)."

At the end of 2018 there were around 1,000 asylum seekers in Thailand compared to more than 7,000 in 2014. The UNHCR cites the drop as evidence of faster processing of cases to resolve the backlog.

But less than 1% of the world's refugees are resettled each year while the number of places available "continues to decline", according to a UNHCR spokesperson.

Ahmed, a refugee from Somalia, was locked up at the Bangkok IDC with his brother.

Like Ms Qunun, he too hopes to be resettled in Canada. But the similarities end there -- he has been in detention for four, long years.

"Nothing is moving forward," he told AFP."But we are holding on."

Others have given up hopes for resettlement.

Lama, a Syrian, fled the war-ravaged country four years ago while pregnant with twins.

She and her husband sold their belongings and bought a plane ticket to Thailand.

They obtained UN refugee status in 2017 but were placed in detention centres to await possible resettlement.

The monotonous, overcrowded life in the IDC wore them down and they decided to give up their quest for asylum in early January and head back to Syria.

"It's very hard to be here again," Lama told AFP from Damascus. "We never leave home (because of) security issues... but at least we are all together."

Inside the Bangkok IDC the fast-tracking of Ms Qunun's case -- and the accompanying scrutiny of Thailand's immigration policy -- has offered a glimmer of hope for change. 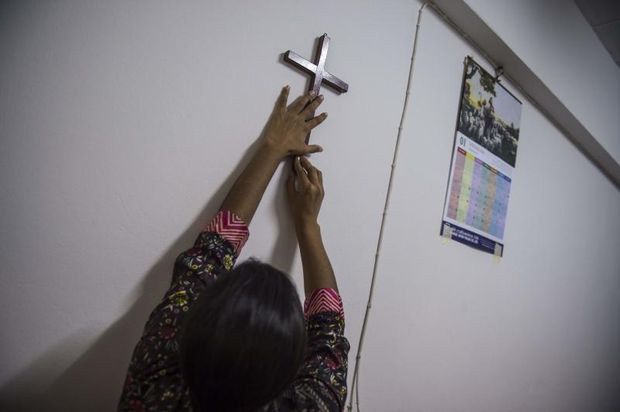 Shamim, a Pakistani-Christian asylum seeker, places a cross on the wall of her apartment in Bangkok while her husband Nazir remains detained at Thailand's immigration detention centre.

In Nazir's case, he and his wife Shamim were granted UN refugee status three years after fleeing Pakistan when Shamin converted from Islam to Christianity and married Nazir in secret.

In Thailand they lived on the margins but enjoyed happy moments, including the birth of their daughter, until an immigration crackdown saw Nazir swept into detention for visa overstay.

His wife now lives with her daughter in a small one-room apartment in a Bangkok suburb, visiting Nazir every week.

The Saudi "case was so quick... (I have) never seen (anything like it) before. She is very lucky," Shamim said. "But our lives are being wasted."

This 18-year-old Saudi woman fled to Thailand to escape her family. She's since been granted asylum in Canada. pic.twitter.com/cQB6wVCvU1