Some of the 1,666 bear claws, previously owned by at least 84 bears, seized from three wildlife smugglers, shown during a media briefing at Provincial Police Region 1 Office on Tuesday. (Photo by Apichit Jinakul)

NAKHON PATHOM: Officials have seized three dead turtles at the home of a man suspected of involvement in the smuggling of more than 1,600 bear claws.

House owner Thammanoon Khongdee claimed he had a permission to possess the turtle carcasses, but failed to produce it when asked. He was given 15 days to produce the documents, or face legal action, media reported. It was not known whether he was detained or not.

The search was part of an extended investigation following the seizure of 1,666 bear claws seized recently from three wildlife smugglers.

The three men were caught when police searched a Bangkok-Pakse bus at a checkpoint in Wang Noi, Ayutthaya, around 4pm on Jan 19.  The bear claws were found wrapped in plastic inside a travel bag.

As bears have five claws on each paw, that would have involved killing at least 84 bears.

The suspects were identified as Katay Sisouvanh, 28, of Laos, Warapong Panjaem, 58, of Bangkok’s Min Buri district, and Nguyen Van Hop, 39, of Vietnam.

Investigators following up on the seizure suspected Mr Thammanoon was involved. On Sunday they searched his house.

Details were released at a media briefing on Tuesday. 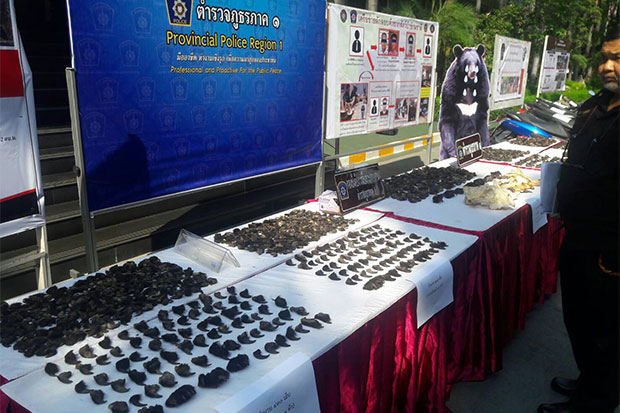 Hundreds of bear claws, some with the pads attached, and the dead turtles, on display at Tuesday's media briefing. Items seized from car thieves in Saraburi are also visible. (Photo by Apichit Jinakul)