Pichayapa "Namsai" Natha apologises in tears during a BNK48 concert at Impact Muang Thong Thani on Saturday night for wearing a swastika T-shirt during a Friday rehearsal. (Screen captured from BNK48 B3 YouTube account)

Pichayapa "Namsai" Natha, a member of girl group BNK48, has apologised for wearing a T-shirt featuring the Nazi flag with a swastika during a rehearsal for a concert on Friday.

Her outfit sparked an uproar on social media and in the international press, but some expressed sympathy, blaming her ignorance of the offence she would cause on the quality of education in Thailand.

The incident occurred just as the world was preparing to commemorate the millions of deaths at Nazi hands on International Holocaust Remembrance Day on Jan 27.

The swastika symbol was used by former German dictator Adolf Hitler as he led Germany to World War II and committed mass murder during the Holocaust.

"The embassy of Israel in Thailand expresses its shock and dismay over the Nazi outfit worn by the singer of BNK48 band," the embassy said in a Facebook post on Saturday. "The wearing of Nazi symbols by the band's singer hurt the feelings of millions around the world whose relatives were murdered by the Nazis."

Namsai apologised in tears during the concert in front of fans at the packed arena on Saturday night. "It's my mistake and my ignorance. Please forgive Namsai, please," she told her fans before collapsing on her knees on the stage with other members consoling her.

She repeated the same message admitting her ignorance on her @bnk48official.namsai Facebook account and other social media accounts shortly after midnight when the concert ended. 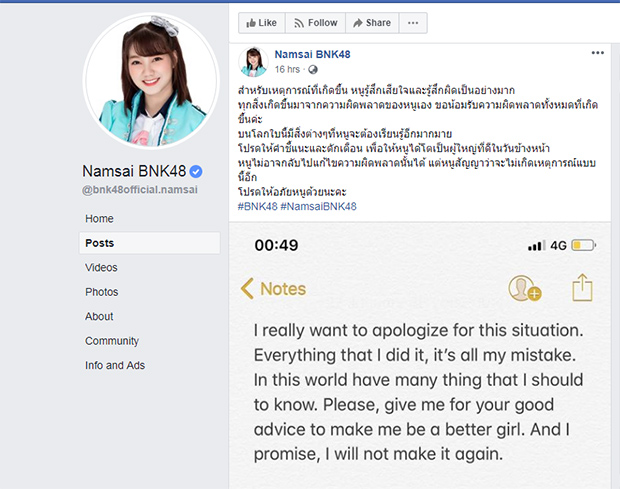 "I really want to apologise and I feel guilty about what happened due to my mistake," she wrote. "I cannot go back to correct the mistake but I promise it will never happen again."

BNK48 Office, the firm set up to handle the band, also issued an apology an hour later.

"We would like to offer our sincere apologies for the incident on 25 January 2019 when one of the members wore a costume which included inappropriate imagery," it said on the @bnk48official Facebook page.

"We inadvertently caused dismay and distress to people all over the world affected by these crimes against humanity. In the future, we will take better precautions and make every effort to ensure that an incident of this kind will never happen again," it added.

Her fans on social media called for others to give her a second chance following the singer's apology. Netizens also used the case to shine a spotlight on Thai education, saying it failed to make students aware of tragedies in world history.

The incident involving Namsai was not the first of its kind in Thailand. In 2011, students at Sacred Heart Preparatory School in Chiang Mai dressed as Nazi SS guards in a parade to open a sports day. In 2013, Chulalongkorn University issued an apology for a graduation mural on the campus showing an image of Hitler.

The swastika and other Nazi paraphernalia can be seen openly for sale in Thailand -- including in Pattaya, where a tourist expressed his dismay.