A follower pays his respects before a picture of Luang Phor Koon Parisutho as final preparations were underway for the royally-sponsored funeral on Tuesday.

KHON KAEN: Prime Minister Prayut Chan-o-cha will on Tuesday join thousands of Buddhist worshippers to bid farewell to Luang Phor Koon Parisutho as he presides over the royally- sponsored cremation of the late revered abbot in Khon Kaen.

Luang Phor Koon was born on Oct 4, 1923, to a poor family in Ban Rai, tambon Kud Phiman in Dan Khun Thod district, Nakhon Ratchasima. After his mother died when he was 11 years old, his father took him to become a temple assistant at Wat Ban Rai in Dan Khun Thod, where he learned the Thai and Khmer languages from senior monks.
He entered the monkhood at the age of 21 and vowed to remain a monk for life to help develop the quality of life of the poor residents of Dan Khun Thod district.

Luang Phor Koon learned Buddhism and meditation from revered monks in Nakhon Ratchasima. He made years-long pilgrimages to Laos and Cambodia to further practice meditation and promote Buddhism. He reportedly learned magic spells from one of his senior monks and mentors to protect him during his pilgrimages.

Later he returned to Wat Ban Rai and encouraged local residents to build and renovate temples, schools and ponds to help local children and villagers. The construction relied on the labour of local residents and the monks.

Luang Phor Koon gradually became famous, with many believing that the amulets and talismans he produced and the objects he used gave magical powers and could miraculously protect wearers from gunshots.
Huge crowds of believers visited him to seek blessings. Their large numbers prompted the revered monk to refrain from the tradition of spraying holy water on supplicants to prevent his pavilion from being soaked. Instead he used his wrapped monk robe to tap the heads and bodies of believers and give them blessings.
Some people went as far as asking the revered monk to step on their title deeds so that they could sell their land at satisfactory prices.

His popularity led to considerable revenues from amulets and donations, which he spent on the construction of schools, police stations, hospitals and temples. Media reported that the overall expenditure exceeded 4 billion baht.
Luang Phor Koon once said that the money was not his, but came from donors who wanted him to spend it in the public interest. He also told his followers not to be obsessed with magical powers but to perform good deeds to enhance their protection.
His development projects brought the monk many royally-presented honorary titles.

Luang Phor Koon was admitted to Maharat Nakhon Ratchasima Hospital in 2015 after he stopped breathing due to ruptured lungs. He was pronounced dead at 11.45am on May 16, 2015, at the age of 92.

At 5.30pm, the premier is scheduled to provide monks with pha bangsukun, the robes used during a funeral, followed by the laying of chan funeral flowers before Luang Phor Koon's coffin.

The cremation will take place at 10.15pm.

"We expect more than 100,000 Buddhists from all over the world to gather at the creation venue," Khon Kaen governor Somsak Changtrakun said, referring to Buddhamonthon in Muang district where an elaborate crematorium has been built especially for the ceremony.

The body of Luang Phor Koon, former abbot of Wat Ban Rai in Nakhon Ratchasima's Dan Khun Thod district, has been kept at Khon Kaen University, where he donated it for medical students to study.

Meanwhile, Niyom Wongpongkum, the dean of the Faculty of Liberal Arts of Khon Kaen University, has brought in 30 craftsmen to carve banana tree trunks to decorate the crematorium that sits atop a statue of the mythical Nok Hassadeelink bird which the faithful believe will fly the monk's soul to heaven.

"Banana tree trunk carving has been part of Thai culture for a long time.

In the past, people didn't have a crematorium, so they would put the casket of the deceased on top of a heap of hay and dry firewood then light the fire.

"The problem was that the fire would burn violently and be hard to control, so they used banana trunks, which contain water, to help control the flames as well as serve as decoration at the same time,'' Mr Niyom said.

According to the organisers, on Wednesday, after the cremation ceremony, the Royal Thai Navy will transport the monk's ashes in a boat along the Mekong River in Nong Khai province to scatter them at a spot called phrathat klang nam in the middle of the river. 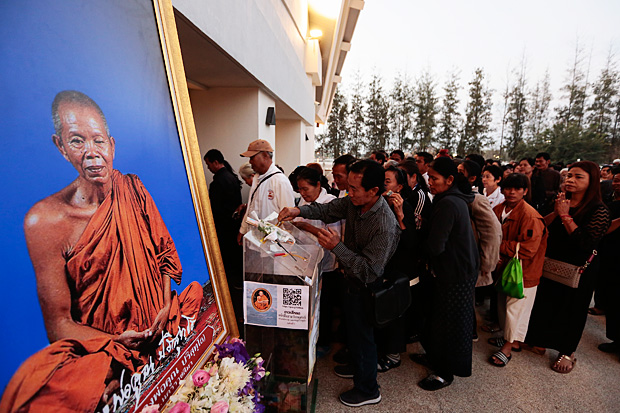 Mourners file into the crematorium where a picture of Luang Phor Koon Parisutho is displayed at the Buddhamonthon in Khon Kaen. photos by Patipat Janthong 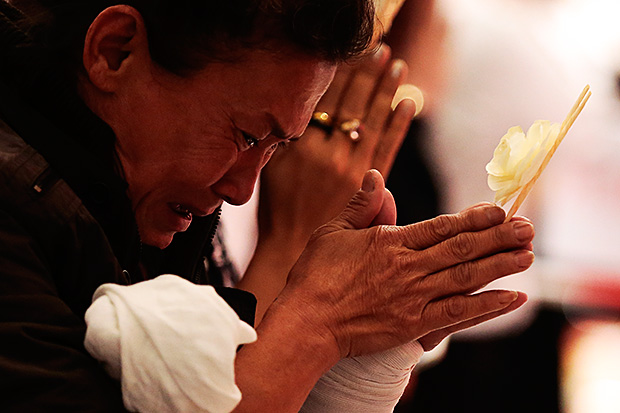 A woman weeps as she prays before placing a funeral flower in her hands at the crematorium. 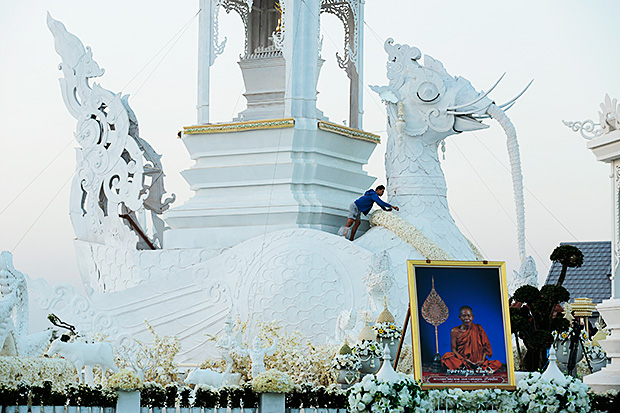 A worker climbs on the mythical bird called Nok Hassadeelink, on which the crematorium sits, for a final inspection before today’s funeral. The bird is believed to fly the former abbot’s soul to heaven. 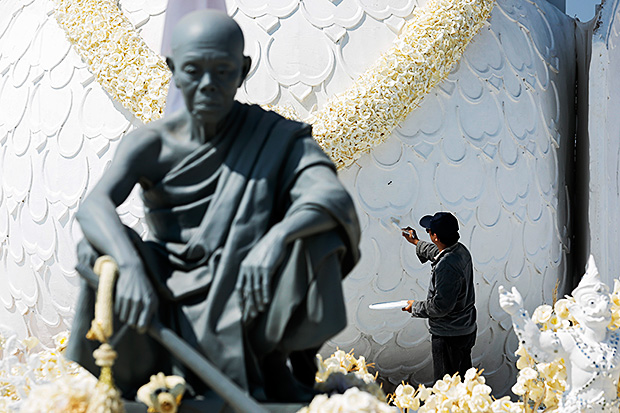 An artisan puts the finishing touches on the crematorium behind the statue of Luang Phor Koon Parisutho. 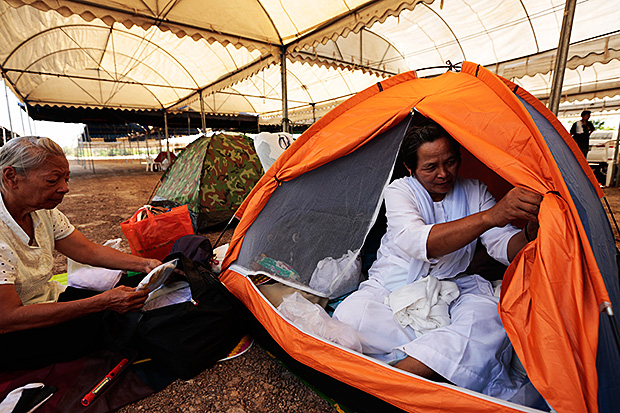 Devotees put up tents around the crematorium grounds in preparation for the funeral of the revered monk today. 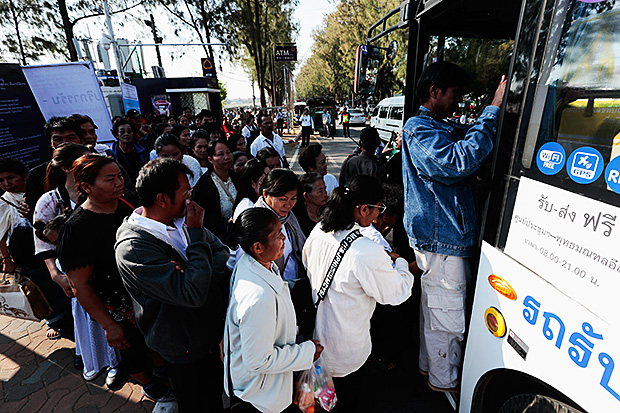 Mourners board a shuttle bus at Khon Kaen University which takes them to the crematorium where they laid funeral flowers yesterday.