These agricultural drones are being deployed to spray water in a bid to reduce the smog that is blanketing Bangkok. (Photo by Apichart Jinakul)

The Bangkok governor on Thursday launched a fleet of large drones to spray water into the air in an attempt to reduce the smog that is blanketing the capital region.

The Bangkok Metropolitan Administration (BMA) borrowed the drones from an agriculture club. They would be flown for dust reduction spraying over six areas of Bangkok, Pol Gen Aswin Kwanmuang said.

It is the first time drones have been employed in this manner in Bangkok.

The drones were from Nakhon Ratchasima and Chaiyaphum provinces. The club had 50 drones, the governor said.

Five drones were used for dust reduction at Lan Khon Muang, in front of City Hall, on Thursday.  The number would be increased and the operation widened, he said .

Each drone could carry 5-10 litres of water and could be flown over a two-square-kilometre area for 15-20 minutes on one charge.

Water trucks were also involved in the operation, spraying  water up into the air.  BMA staff then cleaned the road surface and public areas.

"Drones will spray only clean water into the air, with the Bangkok Fire and Rescue department supervising the operation,’’ the governor said. (continues below) 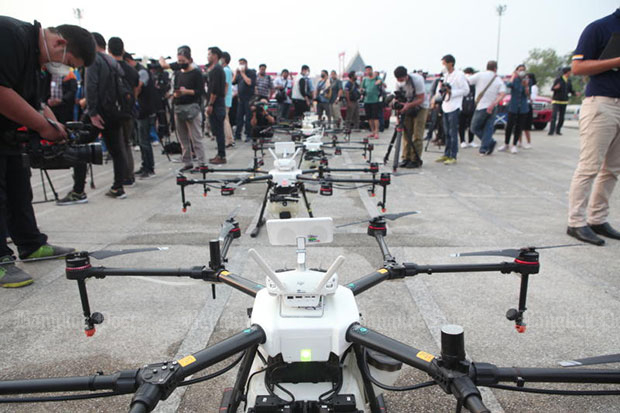 Five drones lined up and ready to fly dust suppression missions at Lan Khon Muang, in front of City Hall, on Thursday.  (Photo by Apichart Jinakul)

The BMA had earlier planned to use water mixed with molasses, to collect more dust from the  air.  However, the drones club had cautioned that the mixture was used for agricultural purposes. If sprayed over Bangkok, coagulated black particles would fall to the ground and on people and vehicles.

Pol Gen Aswin said the drones would be flown from six places - Lan Khon Muang, Wat Phra Srimahathat, Kasetsart University, Chatuchak Park, Lumpini Park and Rama IX Bridge. They would operate for 90 minutes to 2 hours a day in each location.

City Clerk Silpasuai Raweesaengsoon had instructed cleaning and environmental offices to spray water and clean trees in all Bangkok public parks to reduce dust coatings on leaves and branches. To date, trees at 20 parks had been washed, the governor said.

The city administration had also asked the 1st Army Region to assist with water trucks and water-spraying equipment.

Asked by reporters if he thought the drones would be effective, the governor replied, "I don't know everything, so I'm inviting everyone to help."

"If we do nothing, people will criticise us for not taking any action," he added.

The city governor has been authorised to spearhead a campaign to reduce the levels of unhealthy fine dust particles that have shrouded greater Bangkok.

The air in the capital and adjoining provinces has been polluted by accumulating, hazardous  fine particulate matter with a diameter of less than 2.5 micrometres, or PM2.5, for many weeks.

The smog has forced the closure all 437 schools run by the BMA until next week. The Education Ministry also ordered the closure of public and private schools in Bangkok and surrounding provinces on Thursday and Friday this week. 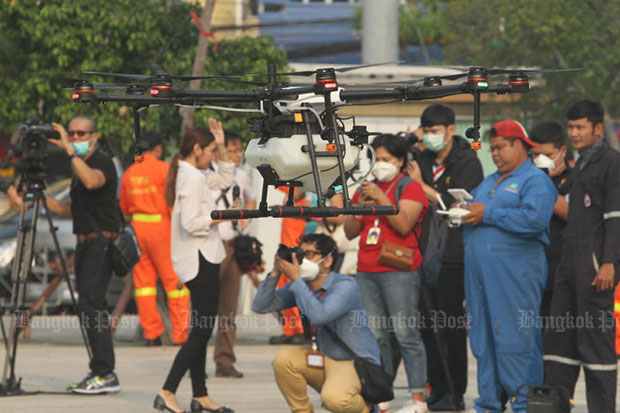 Drones take to the air at Lan Khon Muang in front of City Hall. (Photo by Apichart Jinakul) 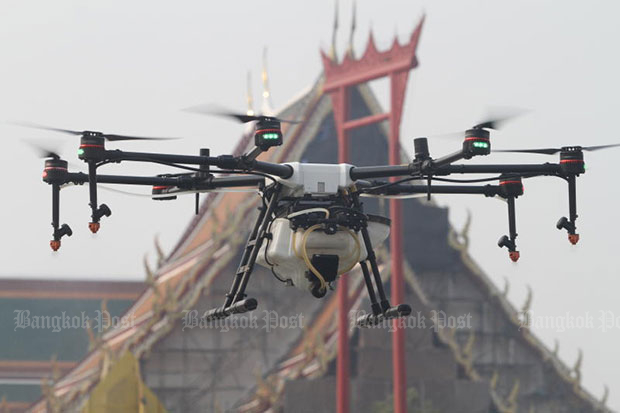