Jakkrit Sengjeen, 27, of Kanchanaburi, files his complaint at the Crime Suppression Division against a police senior sergeant-major he says drunkenly fired shots at him after falling off a motorbike, and then pressed an attempted murder charge against him. (Photo by Wassayos Ngamkham)

A postal worker has sought help from Crime Suppression Division police, accusing a Kanchanaburi policeman of drunkenly firing shots at him, and then bringing a charge of attempted murder against him.

Mr Jakkrit was accompanied by his mother Radjai Sengjeen and a lawyer. He complained the accused officer had wrongfully pressed several charges against him, including attempted murder and illegal possession of a firearm in a public area.

The false charges were laid after the officer fired shots at him on a road in Muang district, Kanchanaburi on Jan 15, he said.

According to Mr Jakkrit, he and a friend were travelling on a motorcycle along Linchang Khao Poon Road in tambon Nong Ya about 9 o'clock that night and saw a rider on a big bike weaving along the road ahead of them, near Khao Poon School.

The rider appeared to be drunk, Mr Jakkrit said. He approached from behind, intending to overtake the bike. The rider, who was wearing a full-face crash helmet, suddenly turned to look back at them at a curve in the road. The rider lost control of his bike and it crashed to the ground, he said.

He slowed down, intending to help, only to be met with two gunshots fired by the downed man. One bullet hit his left leg, Mr Jakkrit said. His friend, who was riding pillion, fled to seek help from houses nearby while he sped off in fear.

He later phoned his mother to tell her he had been shot and she took him to file a complaint at Muang police station.

While he was giving his account to a duty officer, 3-4 men arrived at the station, claiming to be members of a Kanchanaburi provincial police investigation team. They demanded to be allowed to take him to the provincial police office for interrogation, alleging he had fired gunshots at one of them in a bid to steal the rider's big bike.

Mr Jakkrit said he denied it, because he was the one who was shot. But those men insisted they would take him to the provincial police office.

His uncle, a soldier, then intervened for fear they might assault him, the complainant said.

His friend was caught by the same men and assaulted, he added.

Mr Jakkrit also said those men had searched his house, but found nothing incriminating. On Jan 21, a court warrant for his arrest was delivered to his house, citing several charges, including attempted murder, he said.

“Since this incident I have been very stressed. These charges are being pressed against me even though I have not committed these crimes. At first, they accused me of trying to steal a big bike. The police investigation report did not mention any theft charges. The arrest record makes no mention of a weapon.

“My relatives and I spoke to local residents and found that the police senior sergeant major's conduct is often inappropriate. He drinks at a shop in the area and often fires shots inside it.

"He wrongly pressed charges against me because he feared I would file an attemptedmurder charge against him,’’ Mr Jakkrit sid.

He said he had not known the accused officer previously and had no personal grudge against him.

Mrs Radjai said the incident had besmirched the family's name. Her son had an unblemished record. He was never involved in drugs or other crime.

As a consequence of the false charges, her son had been suspended indefinitely from his job at the post office and now had no income.

The family would fight the case to the end, she said.

“Many witnesses are willing to testify on our behalf. I appeal to the CSD to look into this case. If possible, I want the case to be handed over to the Central Investigation Bureau. I no longer have any trust in local police. I want justice for my family and my son,’’ Mrs Radjai said.

Pol Lt Col Apisan said CSD investigators had questioned Mr Jakkrit and compiled other evidence. They would submit the case for consideration. 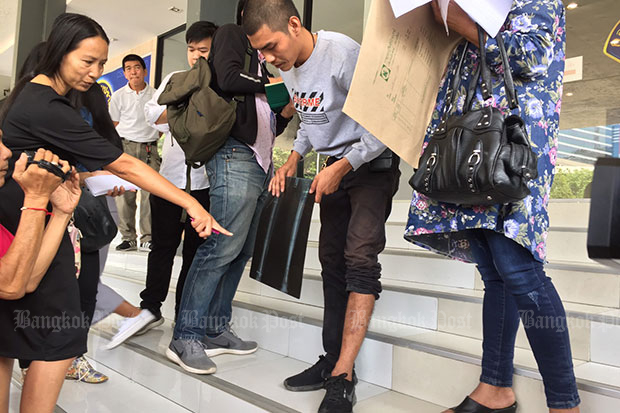 A relative points at the left leg of Jakkrit Sengjeen, 27, where he was hit by a bullet he says was fired by a drunken police officer who had fallen off a motorycle. (Photo by Wassayos Ngamkham)