The government insisted Tuesday that the justice system must be allowed to run its course in the case involving the extradition of Bahraini footballer Hakeem al-Araibi, as a social media campaign against his extradition using the hashtag #BoycottThailand gathers steam.

Prime Minister Prayut Chan-o-cha said the case would be tried in court in compliance with Thai judicial procedures and the government is not in a position to interfere.

He said the Ministry of Foreign Affairs has been seeking cooperation from Bahrain and Australia to engage in dialogue so a satisfactory solution can be found. 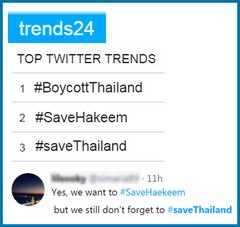 Talking about the campaign, Gen Prayut urged people not to get involved.

He said the government would do its best to ensure ties with both countries are not soured.

His appeal had no effect. If anything, it inflamed the Twitterati even more.

The latter hashtag consisted mostly of tweets that either defended the "fair" court system currently mulling the refugee footballer's fate, or put the blame back on Australia. Interpol Australia issued the Red Notice request to detain Mr Araibi, although that notice was later withdrawn as it turned out it never should have been issued.

On Monday, Mr Araibi was taken from Bangkok Remand Prison to the Criminal Court, where public prosecutors sought an order to extradite him to Bahrain. The pictures of Mr Araibi hobbling into court in shackles sent ripples of shock around the world.

In Canberra, Prime Minister Scott Morrison said he was "disturbed" by the photos, and protested to Gen Prayut. 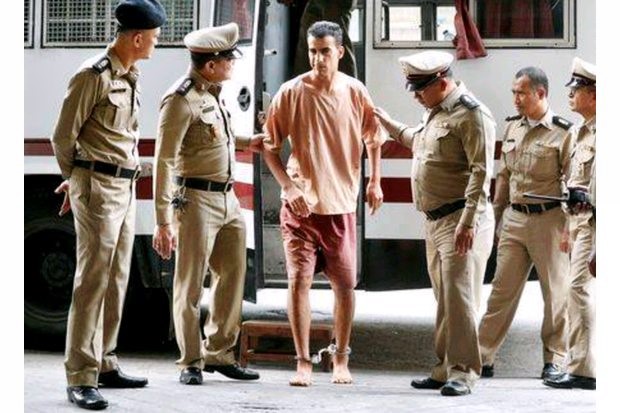 Photos of al-Araibi being taken to the Criminal Court in shackles on Monday went worldwide and drew massive negative comments. (Reuters photo)

Foreign Minister Don Pramudwinai said Thailand was willing to act as a facilitator if Australia and Bahrain agree to sit down and talk.

Pol Col Naras Savestanan, director-general of the Corrections Department, said the use of anklecuffs was a carefully weighed decision. Section 21 of the Corrections Act authorises warders to use shackles on detainees when they are brought out of a prison.

“Warders considered the detainee is of interest to society and could impact international relations. As a result they decided to put anklecuffs on him,” Pol Col Naras said.

The Corrections Department risked facing human rights criticism, Pol Col Naras said, but the public should understand that officials had to ensure the safe transportation of detainees and prevent any attempt at escape.

Chatchom Akapin, director-general of the International Affairs Department at the Office of the Attorney-General (OAG), said Mr Araibi’s alleged crime was not a political offence, which meets the criteria for extradition under Thai law, even though Thailand and Bahrain do not have an extradition treaty.

“Thailand is stuck in the middle,” he said. “We won’t show favouritism to either side. We'll just consider the case based on the law and the need to maintain neutrality. The final decision is up the court.”

The bureau has asked Australian authorities to send documents regarding Mr Araibi’s refugee status in Australia, and the reasons why it is against his extradition, so that Thai authorities will forward them to the court for consideration, the source said.

On Monday, Mr Araibi told the Criminal Court he refuses to be voluntarily extradited to Bahrain, which has asked for his return to serve a prison sentence for a crime he denies committing.

His rejection means a hearing will be held to determine his fate. He claims he would be tortured if sent back to the country of his birth.

His supporters say he is protected by his refugee status with Australian residency.

A court filing last week by prosecutors noted that extradition is still possible if Bahrain makes an official request, which it did, and if the crime is punishable by over a year in prison, and is not politically motivated or a military violation, which also appears to be the case.

The Bahraini government insists Mr Araibi be treated as a convicted fugitive.

It said the footballer would have the chance to appeal in its own domestic courts.

The Bangkok court has set an April 22 date for its next hearing.

Thai officials previously said the process could be lengthy, depending on how many witnesses each side call.

Mr Araibi, 25, a former Bahraini national team player, says he fled his home country due to political repression. Bahrain wants him returned to serve a 10-year prison sentence he received in absentia in 2014.

He was detained upon his arrival in Bangkok in November while on honeymoon, and subsequently was held pending the completion of the extradition request by Bahrain.

Australian Prime Minister Scott Morrison sent a letter last month urging Thailand to stop the extradition, and football governing bodies and human rights activists have urged the country to let him return to Australia, where he lives and plays for a semi-professional team in Melbourne.

Shortly after the court set the April 22 date, the Australian ambassador to Thailand issued a statement saying the Bahrain government knew very well that Mr Araibi had lived in Australia since 2014.

During those four years, it did not attempt to ask Australia about him. It waited until he ventured to Bangkok, the statement said.