Police, forestry officials and monks enter the oil-palm plantation where a 35-year-old monk was found dead, killed by wild elephants, at his place of seclusion on Wednesday morning.(Photo by Sonthanaporn Inchan)

CHACHOENGSAO: A Monk on the last night of a 19-day seclusion was killed by wild elephants near Khao Ang Ruenai Wildlife Sanctuary in Tha Takiab district.

Phra Prapop Chanphaikhor, 35, of Sammadang monastery in Tha Takiab district, was found stomped to death a short distance from his crushed meditation tent at the back of a 15-rai oil-palm plantation on Wednesday morning, Pol Maj Surapisit Makngam, investigation chief at Tha Takiab, said.

Rescue workers took his body to Tha Takiab Hospital, where doctors said he had died at least 6 hours before his death was reported about 8.30am.

Phra Won Thongnoi, 76, of Wat Samed Nua in Bang Khla, told police that he, Phra Prapop and another monk from Samadang monastery, assisted by four laymen, had set up their tents and been in seclusion in the plantation since Jan 25.

On Tuesday night, all but Phra Prapop left the area behind the plantation. The 35-year-old monk wanted to stay there another night because it was quieter than the place near the plantation living quarters the other monks moved to.

On Tuesday morning, the other monk from Sammadang monastery returned Phra Prapop’s seclusion site, but found his tent smashed to pieces. Phra Prapop's broken body was about 15 metres away, the 76-year-old monk said.

Thawee Sathuchart, 61, a former kamnan of tambon Tha Takiab, said the plantation belonged to a retired teacher, Samnao Limrak, and monks often went there to go into seclusion.

He said wild herds totalling about 200 elephants had been pillaging local plantations over recent years, and had become increasingly fierce.

Forestry officials had tried to push them back into Khao Ang Ruenai Wildlife Sanctuary by setting off firecrackers. But the loud noise had not scared the animals away. It instead made them angry and even more violent, the former kamnan said. 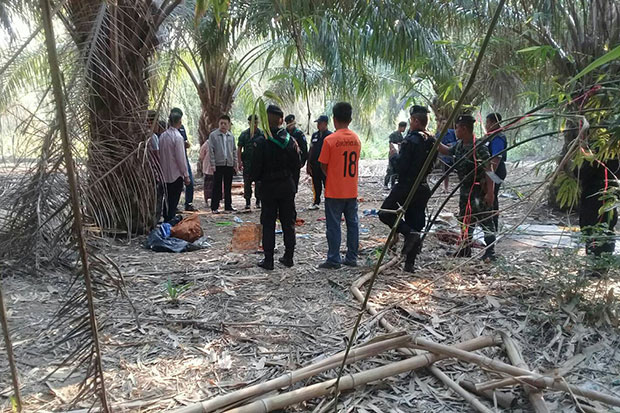 Police and forestry officials with the body of  Phra Prapop at the bak of the palm plantation in Chachoengsao. (Photo by Sonthanaporn Inchan)