Kaewmanee Arjor, 59, who has Alzheimer's disease, is found walking along a road in Kunming, China, about 600kg from her hometown in Chiang Rai, eight months after she was reported missing. Immigration police have donated money to fly her back on Friday. (Supplied photo)

CHIANG RAI: A woman suffering from Alzheimer’s disease reported missing from her home in this northern border province eight months ago has finally been found - 600 kilometres away in Kunming City, China

Ms Kaewmanee has been missing from her home in tambon Wiang Rop of Muang district, Chiang Rai province since June last year. 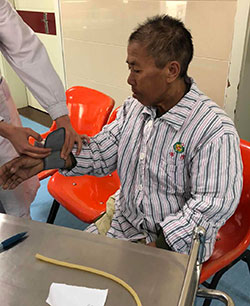 The missing woman receives treatment at a hospital in Kunming. (Supplied photo)

They had recently been notified by the Thai consulate in Kunming, Yunnan province, that she had been found walking on a road in Kunming, about 600km north of the Thai border.

Chinese police who spotted the woman found she had a Thai ID card and symptoms of Alzheimer’s. They took her to a mental hospital and informed the Thai consulate, Pol Col Ekkorn said.

It was strange that Ms Kaewmanee had been found so far from Chiang Rai, he said.

Her daughter worked at a golf course with a daily wage of just 300 baht. The woman could not afford to bring her home. Chiang Rai immigration officers had helped the family on humanitarian grounds by donating money to cover her travelling expenses, Pol Col Ekkorn said.

Ms Kaewmanee was due to depart Kunning at 11am on Friday on China Eastern Airlines Flight 2597, due to arrive in Chiang Rai at 12.55pm, the provincial immigration chief said. 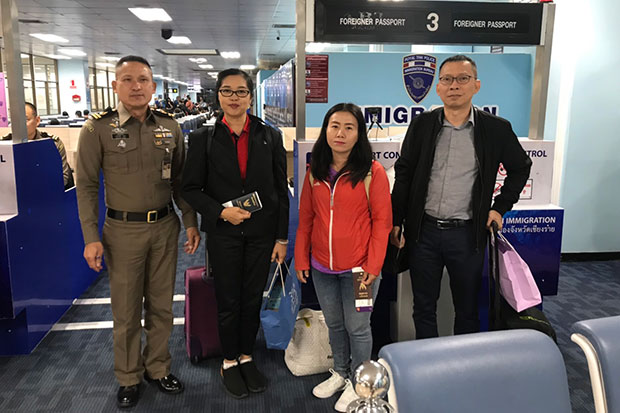 Immigration police and the missing woman's daughter pose for a photo in Chiang Rai before boarding a flight to Kunming on Wednesday. (Photo by Chinpat Chaimon)