Kaewmanee Arjor, 59, seated centre, found in China eight months after she went missing, is questioned by a senior immigration officer as she is reunited with her daughter after arriving at Chiang Rai airport on Friday. (Photo by Chinpat Chaimon)

CHIANG RAI: A 59-year-old woman with Alzheimer’s disease found in China eight months after she went missing arrived back at her home home in this northern border province on Friday.

Kaewmanee Arjor was warmly welcomed when she arrived at Mae Fah Luang Chiang Rai international airport . Two Chiang Rai immigration officers and her daughter flew to China on Wednesday to collect her.

She was found by Chinese police this week wandering along the R3A Highway in Kunming City, China, about 600 kilometres from her home in Chiang Rai.

The highway links the southwestern Chinese province of Yunnan and Chiang Khong district of Chiang Rai. 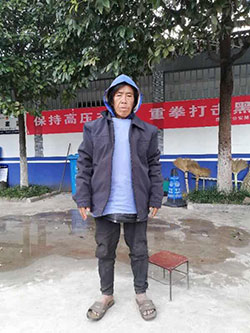 Kaewmanee Arjor is found wandering along a highway near Kunming, China. (Supplied photo)

Ms Kaewmanee was found recently by police in Kunming, Yunnan, walking on the R3A Highway. The officers found she had a Thai ID card and then informed Thai authorities, Pol Maj Gen Pong-anan said at the airport.

Ms Suchada thanked all concerned for their help, particularly Pol Capt Jaruwon, who accepted her request and followed through with the case until she was reunited with her mother.

She said her mother had told only her that she went there on foot, on a road through forests and mountains, and was unaware that she had left Thailand. Her mother might have entered China along a natural border pass, she said.

When asked about food, her mother said she bought food along the way as she had some money with her.

That was all she could remember.

"Before my mother went missing, she weighed almost 60 kilogrammes. Now, she weighs only 40kg. When I asked her questions, she could answer some, but no details as to how she became lost and where she went. She was strong when she left. She often walked alone for 2-3km a day,’’ Ms Suchada said.

Officials from the provincial human security and social development office would give Ms Kaewmanee a health check-up and rehabilitation treatment. They also said they would find her a suitable job.