An examination room was damaged during a raid by several men that disrupted the GAT/PAT tests at Matthayom Wat Sing School in Bangkok's Bang Khunthian district on Sunday. (Photo from @redskullhelpcrime Facebook account)

A group of young men raided a school while students were taking a university admissions exam, injuring a security guard and damaging a room.

The school is a venue for the nationwide tests.

On Sunday morning, the school had asked people in a nearby house to tone down the loud noises coming from a ceremony to mark a man's entry into the monkhood, saying the noise was disturbing students taking the tests, according to the @Kanyayoei Twitter account apparently belonging to one of the students.

During the afternoon, several men entered the school and ordered students taking the test to leave the room, disrupting the test for about 30 minutes, @Kanyayoei tweeted. Several students and teachers were threatened or harassed, according to the tweet. 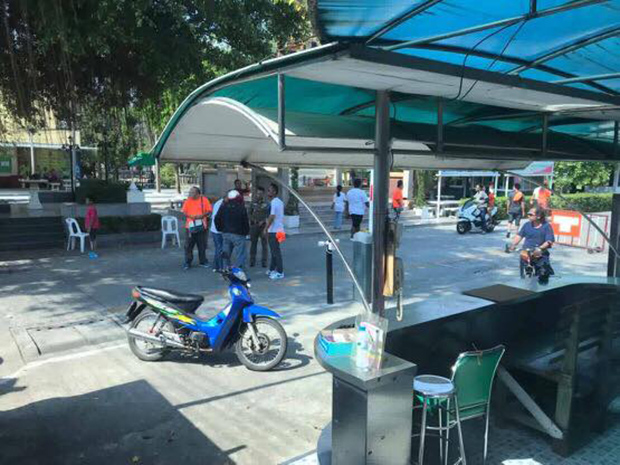 Police are sent to Matthayom Wat Sing School after a group of young men raided the school. (Photo from @redskullhelpcrime Facebook account)

Pictures posted on the Red Skull Facebook account showed an injured security guard and damaged desks in one of the rooms.