A worker waters grass to keep Sanam Luang fresh in preparation for His Majesty the King's coronation ceremony, which is scheduled to be held at the Grand Palace and nearby areas from May 4 to 6. (Photos by Patipat Janthong)

Preparations for His Majesty the King's coronation are almost complete, while the government is awaiting the officially approved royal emblem to be used as the official logo, Deputy Prime Minister Wissanu Krea-ngam says.

Mr Wissanu, who chairs the government committee responsible for organising the ceremonies, said the government has adhered to His Majesty the King's command that his coronation be economical and in line with royal tradition.

The committee is now waiting for a letter from the Royal Household Bureau to confirm the final design of the royal emblem approved by the King.

The emblem will be used as the official logo for the ceremonies and it will be engraved on a container carrying water to be used in the royal purification ceremony, Mr Wissanu said.

The emblem will also be printed on materials including flags on the premises of government offices, he said, adding that those who wish to produce yellow shirts bearing the royal emblem must obtain permission from the government.

The committee has also submitted a number of pictures of His Majesty the King to the palace so that he can choose one to be the official picture which will be used to decorate government office buildings and other locations nationwide, Mr Wissanu said.

Water to be used in the royal purification bath ceremony will be collected from five major rivers -- the Pasak, Chao Phraya, Bang Pakong, Ratchaburi and Phetchaburi -- as well as four large sacred lakes in Suphan Buri, Mr Wissanu said, adding that the King will take a ceremonial bath.

The ceremonies to collect the water will be held on April 6, Mr Wissanu said.

He said water will also be collected from another 108 sources across the country.

This water will be used in the royal anointment ceremony which will take place after the royal purification bath ceremony.

In the royal anointment ceremony, the prime minister, the parliament president and members of the royal family pour the water of anointment onto the hands of the King, Mr Wissanu said.

He also urged the public to wear yellow shirts bearing the royal emblem from April until July as part of national celebrations.

Other events for the coronation include a royal procession planned for May 5, to cover a distance of about 7 kilometres over four and a half hours.

The route will run from the Grand Palace to Wat Bowon Niwet, Wat Ratchabophit Sathit Maha Simaram, and then Wat Phra Chetuphon Wimon Mangkhalaram before returning to the Grand Palace.

A royal barge procession is also planned for late October to consist of 52 barges and 2,200 rowers covering a route of four and a half kilometres on the Chao Phraya River. 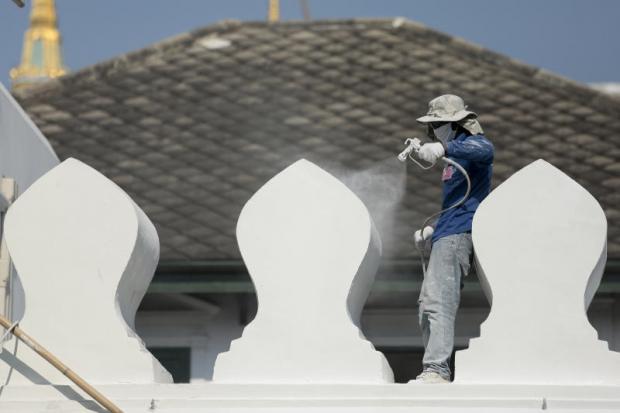 A wall of the Grand Palace is cleaned and beautified as the venue is prepared to celebrate His Majesty the King's coronation.