A fire crew puts out the flames on the burning trailer truck after it crashed into six cars and an asphalt paver on the downhill road from Khao Chong Tako mountain in Ta Phraya district, Sa Kaeo, on Tuesday morning. (Photos by Sawat Ketngam)

SA KAEO: Three people were killed and six others injured when an out-of-control trailer truck careered into seven other vehicles on a narrow downhill road in Ta Phraya district on Tuesday morning.

Local police said the accident occurred about 9.30am.

They said the white Hino truck, registered in Khon Kaen province, was loaded with bags of salt. The driver said the brakes failed as it was descending from Khao Chong Tako mountain in tambon Thaprat.

The fully laden truck crashed into seven oncoming vehicles, including an asphalt paver of the Highways Department, and then caught fire.

Dead and injured were taken to Ta Phraya Hospital. 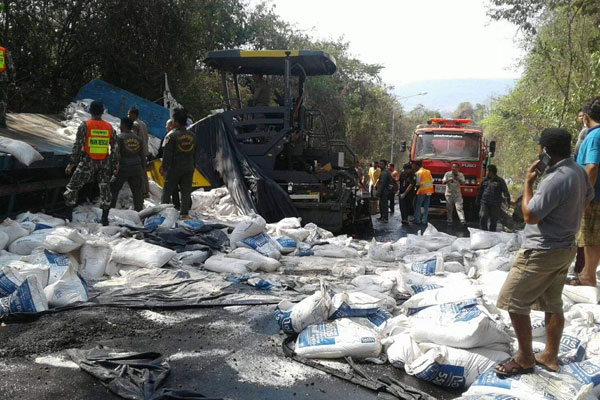