The unidentified foreign man is treated for his injuries after falling from the second floor of a Pattaya hotel in Chon Buri province on Thursday. (Photo by Chaiyot Pupattanapong)

PATTAYA: A deranged foreign man trashed a hotel toilet and injured policemen trying to restrain him before falling naked from the second floor to the ground below on Thursday.

He landed spreadeagled on his back and was seriously injured.

Police and rescue workers were rushed to the hotel in tambon Nong Prue, Bang Lamung district, after hotel staff requested assistance about 10am.

They found many tourists and hotel staff gathered on the second floor in a hallway outside a bathroom door. Inside, a strongly-built foreigner was smashing up the fittings with a wooden baton. When police moved closer to restrain him, the man attacked them with the baton and also threw things at them before closing and locking the door.

Police tried unsuccessfully to force open the door using iron bars the man proved too strong and kept it shut.

Three police were hurt. Pol Cpl Arthorn Wongsing sustained a head wound and the others injuries to their hands, mouth and face.

When police drew back to regroup the man suddenly ran out of the bathroom. He was naked and carrying the baton. Trapped in a dead-end, he used a hotel cart to break the glass wall in a bid to escape, and fell to the ground. He was rushed to Bang Lamung Hospital. His identity and nationality were not known.

Hotel staff told police that they did not know the man. They had seen him walk into the hotel and shortly after heard loud noises coming from the second floor. They investigated and saw the man in the bathroom. 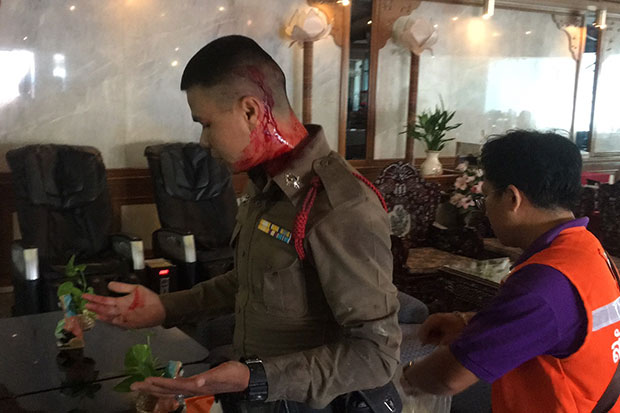 Pol Cpl Arthorn Wongsing sustained a head injury when he and other police tried to restrain the foreigner who was smashing up a hotel toilet in Pattaya, Chon Buri. Three policemen were injured. (Photo by Chaiyot Pupattanapong)