Sacred rituals of the coronation

The coronation of His Majesty the King will follow a centuries-old ritual dating as far back as the start of the Thai monarchy, replete with majesty and grandeur as the King is crowned.

The coronation is made up of several rites which will span three days from May 4-6. But the highlights will take place on May 4, with consecrated water featuring as the most essential component of the royal ritual.

The coronation will formally complete the monarch's accession to the throne and accord full legitimacy to his kingship. 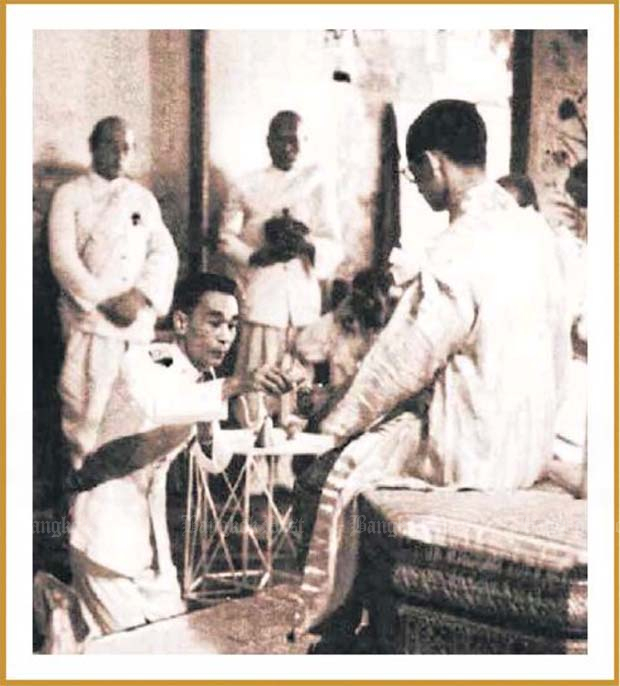 holy water: King Bhumibol Adulyadej, Rama IX, sits inside a specially built pavilion in the Grand Palace for a ceremonial purification shower of consecrated water during his coronation in 1950.

For example, a king who ascends to the throne and has yet to complete the coronation rite is addressed as Somdet Phra Chao Yu Hua.

Only after the coronation ceremonies are completed will he be able to assume the title of Phra Bat Somdet Phra Chao Yu Hua (with the prefix "Phra Bat" preceding the title).

Water at the core of the royal rite

Deputy Prime Minister Wissanu Krea-ngam, who chairs the government committee responsible for organising the coronation ceremonies, said sacred water is considered to be the most important component of the royal rite for Thai kings.

While the crowning is regarded as the supreme event of a European king's coronation, coronation rites for monarchs in Southeast Asian countries which draw influences from ancient Indian traditions, such as Thailand, and Cambodia, attach more importance to the rituals involving the use of sacred water, Mr Wissanu said.

"Therefore, water lies at the heart of the coronation ceremony,'' Mr Wissanu said.

Mr Wissanu said the Thai term that is equivalent for the coronation of a European monarch is Borom Racha Phisek. Borom means great or grand, Racha (King) and Phisek, the shortened form of Aphisek, which means the pouring of water, Mr Wissanu said, adding the Thai term has nothing to do with the crowning.

For ease of communication with Western people, the term coronation is used to describe the ritual for a Thai king, he said. Consecrated water is used in two main rituals on May 4, Mr Wissanu said.

The first is a purification bathing rite or Song Phra Muratha Bhisek -- in which the King will take a ceremonial bath with a shower of consecrated water. Traditionally, the rite is for the monarch to "purify" himself before proceeding to the next important rites.

Water to be used in this ceremony must be collected from specific sources regarded as sacred, he said. 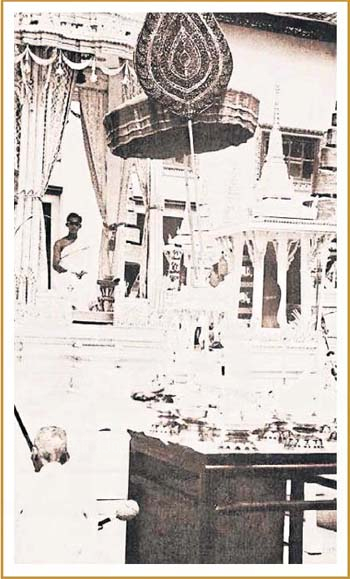 According to ancient scriptures of Brahmanism, water for use in coronations for kings of ancient India is taken from the Pancha Maha Natee or the "five great rivers" of India -- the Ganges, Mahi, Yamuna, Sarayu and Aciravati -- which flow down from Mount Kailash where Shiva, the Hindu God, resides at the summit. Therefore, the water is considered to be sacred and fit for the royal rites.

Evidence of coronation rites appears on a Wat Sichum stone inscription of the Sukhothai period in the 13th century, as well as in the chronicles of the Ayutthaya period (14th to 18th centuries).

However, no evidence shows that water from the five rivers of India was used in coronations of Thai kings in the Sukhothai and Ayutthaya Kingdoms.

Coronation rites for King Rama I to Rama IV of the early Rattanakosin period followed the practice of the Ayutthaya Kingdom, using the water from the five ponds, also with the addition of water from the country's five major rivers -- the Pasak, Chao Phraya, Bang Pakong, Ratchaburi and Phetchaburi.

These five local rivers -- called Bencha Suttha Khong Kha which means five streams of pure water -- are considered to be equivalent to the five rivers in India, reflecting the influence of ancient Indian tradition.

In the first coronation of King Chulalongkorn, Rama V, in 1868, the water used in the ceremony was collected from the same local sources as in coronations of his predecessors.

During his visit to India in 1872, the king also took water from the five rivers there as prescribed by the ancient Brahmin scriptures, and added it to the water from the local sources for use in his second coronation the following year.

His Majesty the King recently advised that his coronation be held economically, and performed in accordance with royal tradition, Mr Wissanu said.

In light of this, the water from India will be excluded for reasons of economy as suggested by His Majesty, Mr Wissanu said, adding that only water from the local sources will be used.

It would be a tough task to travel to India and collect water from the specific sources described by the ancient scriptures of Brahmanism, he said.

In the purification bathing rite on the morning of May 4. His Majesty the King will be dressed in a white robe and seated inside a specially constructed pavilion on a courtyard in the Grand Palace. Officials will then turn on the canopied shower to release the water over the body of the King.

After the Song Phra Muratha Bhisek ceremony is completed, the King will change into his full regal vestments before proceeding into the Baisal Daksin Throne Hall, where His Majesty will be anointed with the consecrated coronation water.

Mr Wissanu said that a new set of regal vestments will be tailor-made for the King for this occasion.

Water is collected from another 108 sources in 77 provinces across the nation and blessed for use in the anointing of the monarch. The ceremony symbolises the King being accorded full legitimacy to rule over the kingdom.

At the Baisal Daksin Throne Hall, the King will be seated on the octagonal Atha Disa Udumbara Raja Asana throne made of fig wood. 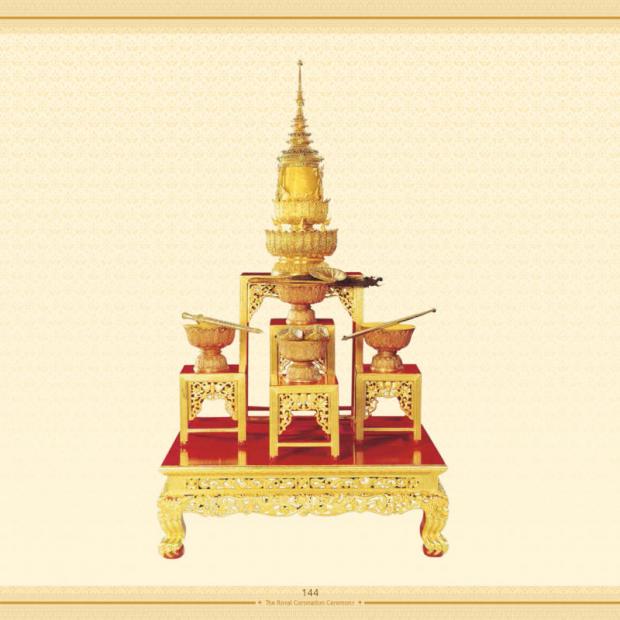 symbols of status: The five objects of the royal regalia symbolise the kingship of a monarch who completes the coronation rite.

The King will receive the consecrated water from eight people, who would then pour it on his hands.

In the past, Brahmins of the royal court were chosen to present the water, as in the coronation of King Rama VII, Mr Wissanu said.

However, in the coronation of King Bhumibol Adulyadej, Rama IX, in 1950, eight members of parliament performed the ritual instead of the Brahmins, underscoring King Rama IX's position in a democratic system.

For the May 4 coronation, Her Royal Highness Princess Maha Chakri Sirindhorn, the King's younger sister; Prime Minister Prayut Chan-o-cha; the National Legislative Assembly president; the president of the Supreme Court, and four Brahmins and the royal court's pandits (scholars) will anoint the King with the coronation water.

Once anointed with the coronation water, the King will proceed to the west end of the Baisal Daksin Throne Hall where he will be seated on another throne called the Bhadrapitha Throne, Mr Wissanu said.

He will receive a golden tablet inscribed with his new official title, another gold tablet bearing the King's horoscope, and the Royal Seal of State presented by the chief Brahmin.

The royal regalia or Khrueang Raja Kakudhabhand comprising six objects will then be bestowed upon the fully consecrated King.

The Myanmar junta handed out at least seven more death sentences this week, taking the tally of those on death row to 139, according to the United Nations (UN).

The Pollution Control Department aims to reduce the number of heavily polluted days in metropolitan Bangkok and 17 northern provinces by 10% next year.