Construction of Bang Sue Central Station, which will replace Hua Lamphong as the city's rail transport hub when it opens in 2021, is almost 71% complete. 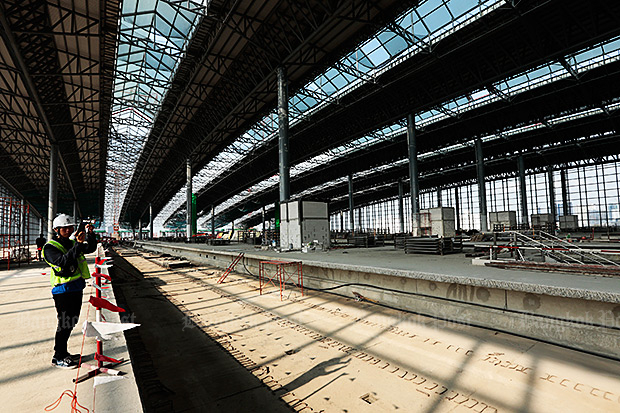 Tracks and a platform are being built inside the Bang Sue Central Station which is part of the Red Line's 80-billion-baht network. It is set to replace Hua Lamphong station as the main rail transport hub when it opens in 2021. (Photo by Patipat Janthong)

A progress report was given to Prime Minister Prayut Chan-o-cha who on Wednesdaypaid a visit to the 264,000-square-metre site.

He said the government has done its best to push for the development of a comprehensive modern rail network to upgrade public transport.

Bang Sue Central Station will not only serve as the country's main rail hub, but will also connect the country's rail system to the rest of Asean.

"This government has sped up development of the rail system. The electric mass transit projects, the high-speed train project and the central station are all the government's work," he said.

He also said areas surrounding the train depot will become "green spaces" and commercial development projects will be developed nearby.

Mr Arkhom said the new train depot is part of a new chapter in SRT's history as it embraces new high-speed train technology.

According to Mr Arkhom, the government's development drive has included expanding dual-track systems from 300km to 4,000km and the construction of high-speed rail routes.

Bang Sue Central Station will have three storeys and a subterranean level, which serves as a parking area accommodating 1,700 vehicles, according to the plans.

The first floor is for ticket sales and reservations, along with commercial areas.

The second floor is for suburban Red Line trains, with four platforms for short-distance services and eight platforms for long-distance train services.

The third floor will have 10 platforms for regional train services and has another two earmarked for high-speed trains and airport rail link services in the future.

It will also have a walkway connecting to the Blue Line mass transit system.

Two trains that will be used for the Red Line's test runs will arrive in June, he added.

Online appointments for Covid-19 vaccination at Bang Sue station in August for people aged 18 or more were fully booked shortly after registration opened on Thursday.