TAK: Teachers and students at a remote school in the hills were delighted when told they were on the list for budget funding of a new building to replace the run-down structure built 38-years-ago.

They happily got to work, levelling the ground in preparation for the long-awaited new building. And they waited ... and waited ... and their hopes dimmed.

Facebook poster Montri Jina, a teacher at the school, turned to social media to air the plight of his school on March 19.

He posted images of the dilapidated tin-roofed wooden building that is Ban Prophado School in Umphang district, and drew immediate sympathy.

“Is it not terrible enough? It must hit the media spotlight and draw the favour of some senior figures to be important enough to get a budget, mustn’t it? Students have to study at this run-down building with a roof that has leaked for many years. Their hopes of getting a new building have gone down the tubes. Justice and equality doesn’t exist. truly,” he wrote. (continues below) 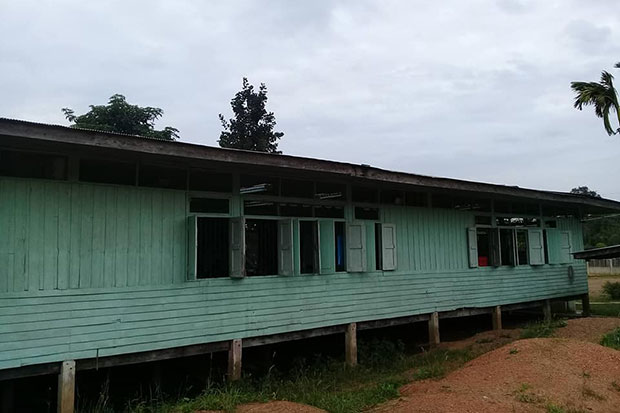 Mr Montri told the Bangkost Post that the wooden building was put up in 1981, when he was 3 years old. He had studied at the school. But time passed and the condition of the building deteriorated. Storms and hail blew away or pummeled the roof on occasions, and rain and strong winds pelted classrooms, damaging education materials, he said.

The school asked for budget funding for a new building in October 2016 to replace the old one after it was hit by a storm in 2016, he said.

When they learned it had finally been placed on the list of schools to get funding for new buildings everyone was delighted. They quickly banded together and prepared the ground for the long-awaited building.

On March 19 this year, Ban Prophado learned it was still not on the final list of schools to get building funding, the teacher said.

The school was in dire need of a new building, he said.