Torrential rain flooded the Sukhumvit Highway and other roads in Pattaya on Tuesday afternoon, with the water over one metre deep in places. (Photo by Chaiyot Pupattanapong)

CHON BURI: A severe thunderstorm dropped pounding rain on Pattaya, causing flooding in many areas with water over one metre deep in places, on Tuesday afternoon.

More than two hours of torrential rain left many areas of the beach city in Bang Lamung district inundated. Both lanes of the Sukhumvit Highway were flooded, with water rising to 1.5 metres. The road became impassable to all vehicles. Many cars stalled and were stranded in the floodwater.

Police and Pattaya municipal officials closed the route and helped the affected motorists. It was at least two hours before the road was partially reopened to traffic.

A  long stretch of a road leading to Soi Khao Noi and Soi Khao Talo was covered with water 50cm to one metre deep.  Other roads in inner areas such as Pattaya Sai 3, Bua Khao Road and Leap Chaihad Road (Beach Road) were under 30-50 cm of water. These roads were passable, but there was heavy traffic congestion throughout the area.

The wall of sandbags the Marine Department had set up along 2.6km of Pattaya beach was also damaged.

The  Meteorological Department on Tuesday forecast that summer storms would continue in areas of upper Thailand into Wednesday, brought by a high pressure system coming in from China meeting rising hot air.

The storms were forecast to bring gusting winds and sometimes hail in the Northeast, North, East and Central regions, including Bangkok and its vicinity.

The weather office again warned people to stay away from outdoor areas, big trees and unsecured billboards during a storm. 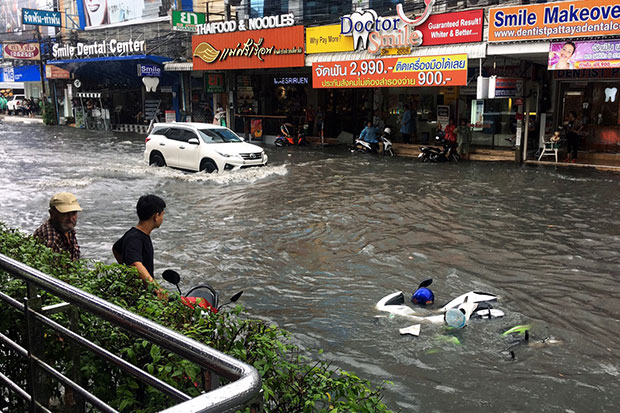 Two men look at a fallen motorcycle in a flooded road in Pattaya on Tuesday afternoon. (Photo by Chaiyot Pupattanapong)