Than "Phra Bomb" Jongthong, 38, is arrested in his living quarters at a temple in Na Yong district with 6,524 speed pills wrapped in plastic bags during a police raid. (Photo by Methee Muangkaew)

TRANG: A monk and a nun have been arrested and about 8,000 methamphetamine pills and an assault rile and 50 rounds of ammunition seized during police operations in three districts.

Than "Phra Bomb" Jongthong, 38, was arrested at his living quarters at Wat Yothong in tambon Nayong, Yong district, after a drug suppression team, led by Pol Lt Col Apichet Jitaksorm of Trang provincial police, searched the room and found 6,524 meth pills in two plastic bags. A pack of small plastic bags and an iPhone were also impounded as evidence, police said.

The monk’s confession led police to arrest Ms Katanyachalee or, nun Bua Seenuan, 26, at her living quarters in the same temple on the same day. Seized from the nun’s room were 630 meth pills, two packs of small plastic bags, a Samsung mobile phone and an iPhone.

Her confession led to the seizure of another 1,242 speed pills along Chonprathan Khok Khilek Road in tambon Na Yong Tai of Muang district, and an M16 rifle, 50 rounds of ammunition and two magazines under Huay Hin bridge in Si Kao district of this southern province.

The monk and the nun were expelled from the temple by the abbot and then held in police custody for legal action. 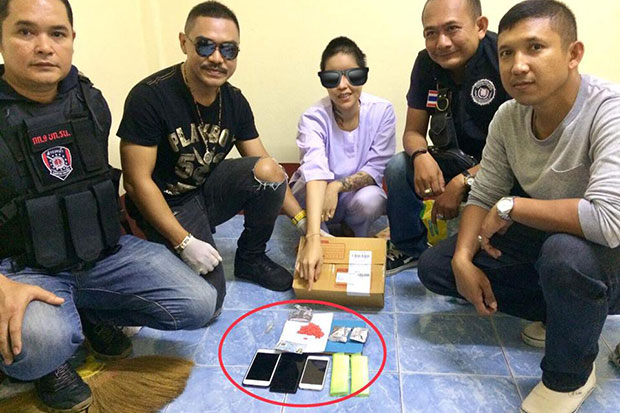 Ms Katanyachalee, or nun Bua Seenuan, 26, smiles while pointing at drugs and other items seized from her living quarters at Wat Yothong. (Photo by Methee Muangkaew) 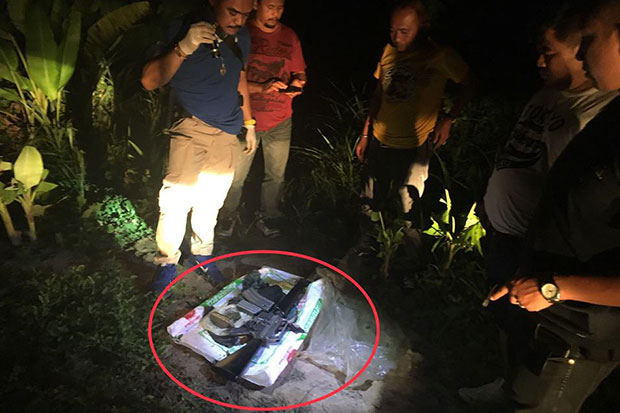 An M16 rifle rifle and other items found in Si Kao district. (Photo by Methee Muangkaew)