The man arrested for raping and murdering a German tourist took drugs before encountering her on her rented motorcycle, following her to a remote spot, raping her and beating her to death with a rock, authorities said on Tuesday.

The bloodied body of the 27-year-old German woman was found by a tourist on Sunday evening buried under dried leaves and rocks on the picturesque island of Koh Sichang in the Gulf of Thailand.

She was "badly beaten" on her face and skull, police spokesman Pol Col Krissana Pattanacharoen said in a statement.

The suspect was identified as 23-year-old Ronnakorn Romruen, a rubbish collector. 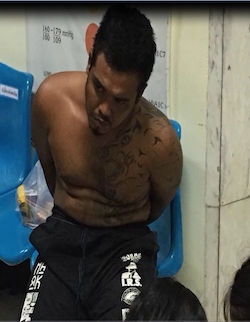 Police say he encountered the German tourist, who entered the country on March 23, near the crime scene and raped her.

"The suspect feared that she would notify the police so he used a rock to hit her on the temple and face," Mr Krissana said.

He was arrested a few hours later in his home, wearing a blood-stained shirt and trousers, police said.

"He confessed to all the charges and admitted he took drugs before committing the crime," Pol Col Atthakoon told AFP.

Thailand is expected to receive upwards of 40 million tourists this year.

While the Southeast Asian country is generally considered safe among travellers, several high-profile incidents have tarnished its reputation in recent years.

In 2014, the battered bodies of two British backpackers were found on a beach in Koh Tao.

Two Myanmar migrant workers were sentenced to death for the murders after a controversial investigation and trial that were criticised by observers.