A woman checks out mobile phone accessories at a mobile phone fair in Bangkok in February. On Thursday Prime Minister Prayut Chan-o-cha, in his capacity as the chief of the National Council for Peace and Order, extends the licence fee payments for three major mobile phone operators. (File photo)

The order, based on Section 44 of the interim constitution and published in the Royal Gazette on Thursday taking effect immediately, instructed the Office of the National Broadcasting and Telecommunications Commission (NBTC) to change the payment plans to 10 annual instalments, starting from the years the operators received their licences.

Up until now, they were to pay the fees in four yearly instalments, ending in 2020-21 (see chart below).

The order aimed to give the operators an incentive to bid for 700MHz and 2600MHz spectra for the development of 5G communication services. Earlier, the companies claimed they would not be able to join the 5G auction because of the burden.

But critics say the order was not necessary since the operators are profitable and could afford to pay the fees by the original schedules.

Somkiat Tangkitvanich, president of the Thailand Development and Research Institute, wrote on his Facebook the "debt-repayment extension" order helped the operators at the expense of the public.

He said based on his calculation on the remaining frequency licence fees, the three operators would reap a combined benefit of 24 billion baht, or 8 billion baht each, which the state should have earned.

He said the excuse of 5G development was unconvincing because Thailand was not ready and did not need to auction off frequencies for 5G development this year. Besides, there was no guarantee the three operators would join the auctions even with the relief, Mr Somkiat wrote.

Section 44 under the interim constitution prohibited people from suing the Prayut government for the action, he wrote.

The academic also pointed out the order was issued ahead of the long holidays, when people paid less attention to news. Besides, it came after the election, apparently to avoid criticisms it favoured the big operators in the lead-up to the poll. 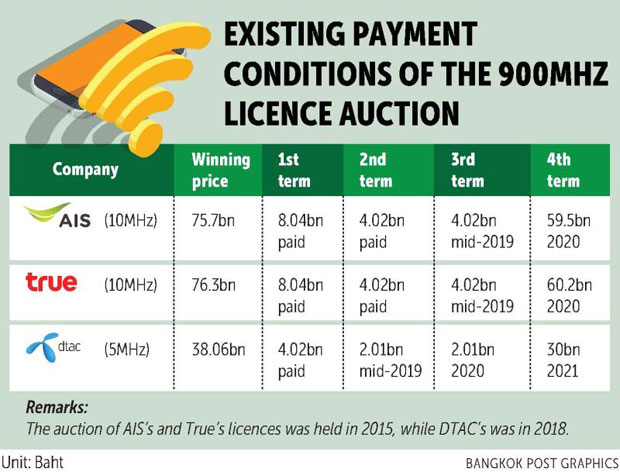