The white Suzuki Swift rest on a bridge rail guard after being fatally hit by a Mercedes-Benz of a drunk driver in Thawi Watthana district, Bangkok, on early Friday morning. (Poh Teck Tung Foundation photo)

The drunk owner of Thai Carbon & Graphite Co was arrested after crashing his Mercedes-Benz into a Suzuki Swift, killing a police lieutenant colonel and his wife and seriously injuring their daughter in Thawi Watthana district of Bangkok early on Friday morning.

Somchai Wayrotepipat, 57, was arrested while appearing drunk -- unaware of the incident and scolding off police and rescue workers. He was taken from his silver Mercedes-Benz E250 on Soi Ngam Thammachart off Thawi Watthana-Kanchanaphisek Road after the head-on collision at 12.40am.

His car collided with the white Suzuki Swift compact car of Pol Lt Col Chatuporn Ngamsuwichakul, 48. The policeman was killed instantly while his wife Nuchanart, 44, and their 16-year-old daughter Piyapa, were seriously injured. The wife later succumbed to her wounds at Rachapiphat Hospital in Bang Kae district.

Mr Somchai was not hurt but had an illegal blood alcohol level at 260mg/dL. Initially, he was charged with drink driving.

Later, he was charged with drink driving causing death, injuries and property damage, as well as murder and attempted murder.

The murder and attempted murder charges were the government's policy to reduce the traffic death toll during the Songkran holiday.

The murder charge carried a death penalty, he said.

The deputy police chief also quoted the suspect as saying that he had played golf with friends and drank about five bottles of beer with them before driving home. He then fell unconscious and woke up again when a safety airbag of his car was activated.

Thai Carbon & Graphite Co claimed to be the largest manufacturer of industrial brushes and mechanical carbon in Southeast Asia. 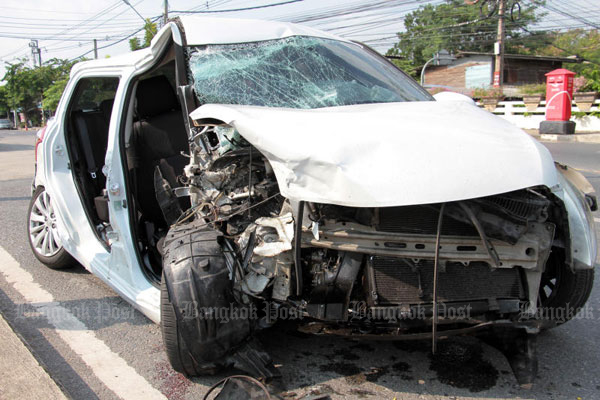 The Suzuki Swift after the crash. (photo by Tawatchai Kemgumnerd) 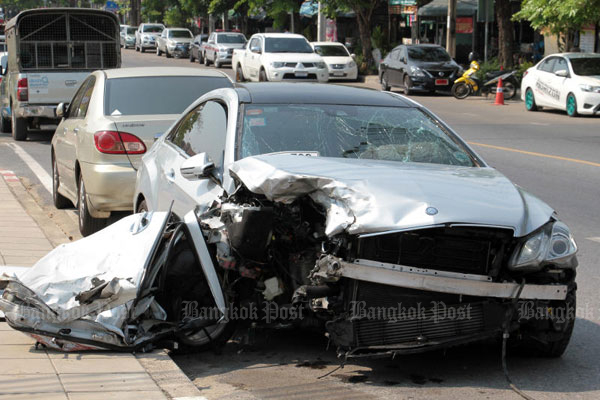 The wreckage of the Mercedes-Benz driven by Mr Somchai.  (Photo by Tawatchai Kemgumnerd)