A dog is found under an oil platform in the Gulf of Thailand. He was rescued later. (Photo from Vitisak Payalaw Facebook)

An offshore drilling team has won praise from netizens for saving a dog stranded in the Gulf of Thailand off Songkhla province after the story went viral online.

Images and a video clip of the shivering dog being rescued were posted on Facebook by a team member on Friday.

The dog, found about 220km from the shore, was believed to have fallen from a fishing trawler.

Vitisak Payalaw, of Chevron Thailand Exploration and Production’s oil drilling team, wrote on Facebook: “On April 12, we found a dog trying to swim to a pole of our oil platform, about 220km from the shore. As wind waves were rather calm that afternoon, we could clearly see its head and water rippling as he was swimming toward our oil platform. If the waves had been strong, we wouldn't have seen him.

"After the dog managed to cling to the pole, he did not make any noise or bark. We tried to find ways to rescue it. Finally, we decided to tie a rope around his neck and pull him to our site. We had to race against time as wind waves might sweep him away. Rescue efforts might be difficult if he had been swept away. At last, we did it. The dog was pulled from the sea safely. He looked exhausted. Now, we are taking care of him and will later bring him ashore. The dog might have fallen from a fishing trawler or jumped into the sea possibly to escape abuse on the vessel.’’

The dog's condition has significantly improved after being treated and fed with mineral supplements.  Many netizens thanked and praised the rescue team after the story was shared online. Mr Vitisak later posted on Saturday he would not accept donations.

The story of a dog rescued from the sea is posted on Facebook user Vitisak Palalaw Facebook page. 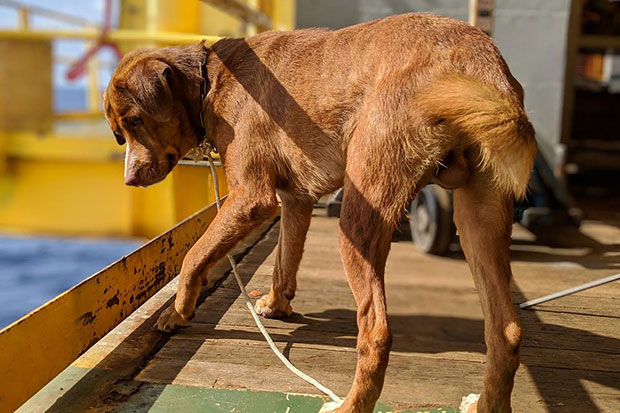 The dog looks healthy after being rescued from the Gulf of Thailand, about 220km off the shore in southern Songkhla province. (Photo taken from Vitisak Payalaw Facebook page)

E-tickets for traffic violations in use from May

Saudi Arabia will invest 300 billion baht in various industries, including tourism, energy and medical care, next year, according to a government spokesman.

The Justice Ministry is preparing various government agencies for a new law set to take effect on Jan 23 aimed at preventing people convicted of sexual and violent crimes from reoffending.