A stranded dog rescued from the Gulf of Thailand off Songkhla was brought ashore on Monday morning, and seemed relieved to be back on dry land.

Boonrod (survivor), as he was named by members of an offshore drilling team, arrived at Songkhla pier at around 10am on Monday. He was warmly greeted by animal lovers from Watchdog Thailand and veterinarians.

The shivering animal, found at sea about 220km from the Songkhla shore, was believed to have fallen from a fishing trawler. The dog swam towards an oil platform and clung to a pole on Friday. The four-member rescue team used a rope to harness the dog and pulled him to safety.

Vitisak Payalaw, a member of Chevron Thailand Exploration and Production’s oil drilling team, wrote on Facebook on Monday: "Today (April 15), a vessel transporting the dog arrived onshore at around 10am. His overall condition has improved. He is getting stronger and can smile.’’

He thanked everyone involved in the rescue operation, and said Boonrod would be taken to an animal clinic in Songkhla for further care.

If nobody claimed ownership of the dog, Mr Vitisak said he would take Boonrod back to his own home in Khon Kaen. 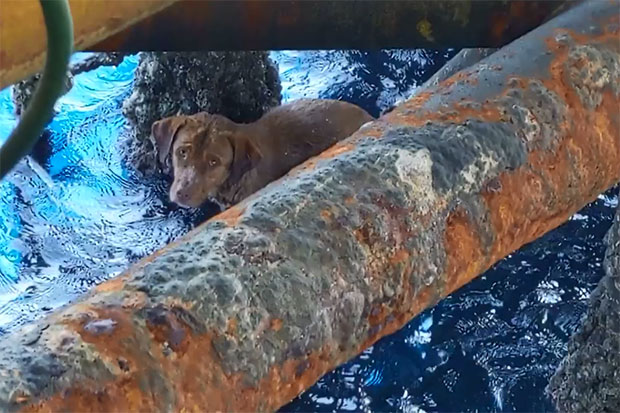 A dog is seen under an oil platform in the Gulf of Thailand. (Photo from Vitisak Payalaw)

The dog is rescued from the sea on April 12. (Photo taken from Vitisak Payalaw Facebook page)

Weather forecasters are warning of sudden floods and runoff from heavy rain that is expected to continue in most parts of the country over the next three days.

SURAT THANI: Direct flights linking Koh Samui with Phnom Penh have raised hopes of more visits by beach lovers and culture enthusiasts to the resort island in this southern province.