Officials inspect damage after a severe storm lifted a house off its foundations in Muang district of Kalasin. (Photo by Yongyut Phupuangphet)

KALASIN: More than 170 houses in six districts of this northeastern province were damaged by summer storms that unleashed heavy rain and gusty winds on late Friday night.

Tambon Klang Muen in Muang district was the hardest hit area, with about 90 houses damaged. The roofs of many houses were blown away. Damage was also reported in Sathatsakhan, Kham Muang, Somdet, Don Chan and Kamalasai districts.

Deputy governor Veerasak Srisopha on Saturday led officials to survey the damage. Local residents told them that the storm struck late when many of them were sleeping upstairs in their homes. Some rushed downstairs as the winds were strong. Shortly afterward, their roofs were blown away, but nobody was hurt.

Mr Veerasak said assistance would be provided to affected residents as soon as possible after the damage was assessed. Volunteers were being sent to help repair the houses.

In Nakhon Ratchasimama, meanwhile, hail lashed Prathai district on Friday evening, damaging 40 houses in tambon Prathai and tambon Krathumrai. Many houses lost their roofs but nobody was hurt. Hailstones lie on the ground in Prathai district of Nakhon Ratchasima. (Photo by Prasit Tangprasert) 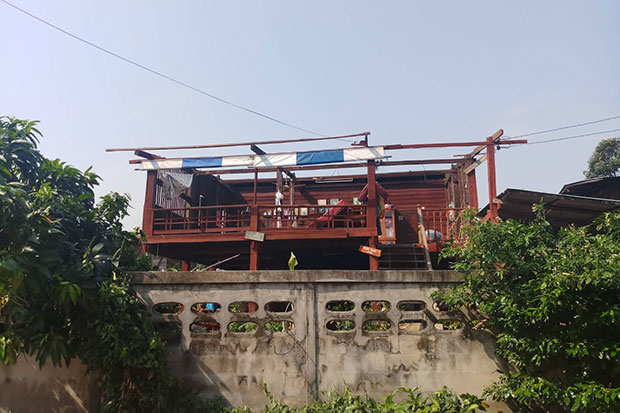 Strong winds lifted the roof off this house in Muang district of Kalasin. (Photo by Yongyut Phupuangphet)