Court orders SRT to stump up

The State Railway of Thailand (SRT) may need to devise a new debt-restructuring plan, after a court ordered it and the Transport Ministry to pay almost 12 billion baht in compensation to Hopewell (Thailand) Co for scrapping a mega-transport project 20 years ago, a rail agency source said.

The terminated project comprised the Hopewell 60 kilometre-elevated railway as well as a tollway in Bangkok.

"We need to come back to discuss how to pay this," an official source told the Bangkok Post.

"We may have to map out a new debt-restructuring plan since the ruling pushes the agency's 100-billion-baht debt up by around 10%."

The source said that with losses totalling about two billion baht each year, the SRT is already "drowning in toxic debt", which means it cannot seek more loans.

As the SRT currently employs thousands of workers on its double-track upgrades and general railway operations, the source said that the SRT may be forced to outsource the work to push down costs.

Attempts to boost income by buying new trains to serve the double-track rail routes have also been hindered by problems concerning the bidding process, the source added. 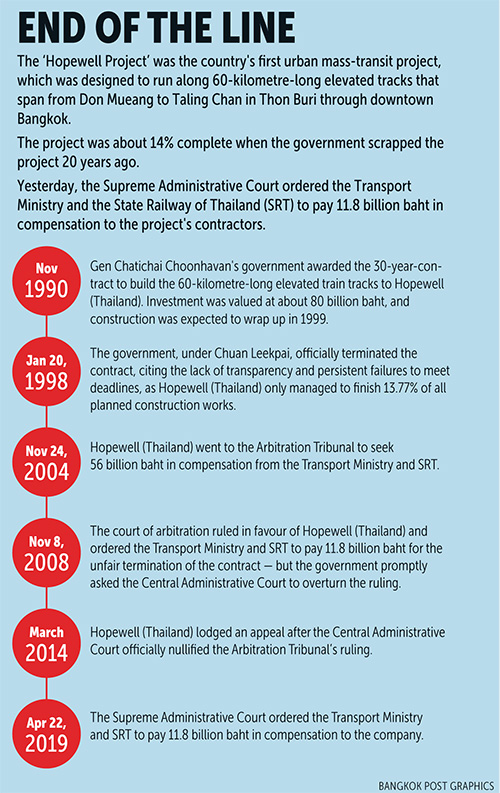 Transport Minister Arkhom Termpittayapaisith said he ordered the SRT to hold an urgent meeting to figure out what should be done in the aftermath of the court ruling.

The ministry, he said, will discuss the ruling in a cabinet meeting as soon as possible to map out an action plan.

SRT acting governor Worawut Mala said the agency's board members have been invited for talks today to seek out a solution, which will be forwarded to the Transport Ministry.

Deputy Prime Minister Wissanu Krea-ngam on Monday stressed that Section 44 will not be invoked to bail out the SRT.

Prime Minister Prayut Chan-o-cha said that regardless of when the problematic projects were initiated, the current administration is duty-bound to step in and resolve any lingering disputes.

"We have tackled problems that arose from projects we didn't initiate, yet we are still being criticised," said Gen Prayut.

The Supreme Administrative Court on Monday ordered the SRT and the Transport Ministry to pay 11.88 billion baht in compensation to Hopewell for the cancellation of the project.

The court also ordered that payments, at a 7.5% interest rate, be made within 180 days.

The Supreme Administrative Court's ruling on Monday was similar to the ruling proposed by the Arbitration Tribunal over a decade ago.

When asked by Hopewell to make a ruling, the Arbitration Tribunal on Nov 8, 2008, ordered the SRT and the Transport Ministry to pay compensation.

However, the Central Administrative Court nullified the Arbitration Tribunal's ruling in March 2014.

The tribunal lacked the authority to decide on the Hopewell project because Hopewell filed its complaint after the five-year arbitration complaint period had ended, according to the Central Administrative Court's ruling, which Hopewell appealed.

The contract to build the "Hopewell Project" was signed on Nov 9, 1990, when the late Montri Pongpanit was the transport minister in the Chatichai Choonhavans government. When the 30-year concession was granted in 1990, investments in the project totalled about 80 billion baht.

The contract was officially terminated on Jan 27, 1998 by the Chuan Leekpai-led Democrat government, when Suthep Thaugsuban was the transport minister.