KHON KAEN: A man accused of killing his girlfriend in a fit of jealousy has denied the charges, claiming he was playing Russian roulette with her when the gun went off in his apartment, police said yesterday.

Police yesterday took the two suspects -- Thongchai "Tam" Klangmuang, 30, and Thampassorn Phuttharaksa, 26 -- to the Khon Kaen provincial court to seek approval for the first 12-day detention period. Suspects can be held for up to 84 days before a formal indictment is made. 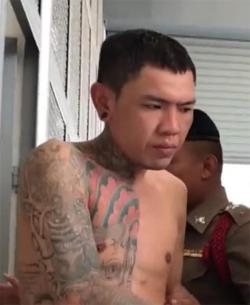 The pair were arrested on Friday for the murder of Patya Puangsook, 22, who was shot dead at Mr Thongchai's apartment early on April 22.

Mr Thongchai was arrested in Trat and Ms Thampassorn was taken into custody at a resort in Surin province.

The arrests followed a police examination of security footage from an apartment in downtown Muang district of Khon Kaen. It showed a man and a woman carrying what was believed to be Patya's body to a motorcycle.

Ms Thampassorn was later taken to the apartment for a crime re-enactment, and then to the Huai Phra stream where the body was dumped.

Police said the killing took place after Mr Thongchai argued with Patya, as he was upset she had been chatting and taking selfies with other men at a restaurant the couple had visited earlier that evening.

During questioning, Mr Thongchai denied all charges and said he would give his statement in court only. Ms Thampassorn also denied all charges, except the drugs charge. Police opposed bail for the two suspects.

"Mr Thongchai kept insisting that he did not point a gun at Patya's head and shoot, but he was merely played a game of Russian roulette with her," said Pol Col Pakpoom. "He also refused to participate in a crime re-enactment."