KHON KAEN: The dog rescued by oil platform workers in the Gulf of Thailand is settling in at his new home, and is already the darling of the neighbourhood after his first appearance in public on Monday.

Vitisak Payalaw, an offshore planner for Chevron Thailand Exploration and Production, took Boonrod on a flight from Hat Yai airport in Songkhla to Khon Kaen and then directly to his home in Muang district on Sunday.

He said he had intended to travel by car to Khon Kaen, but changed his mind after thinking about the long  1,500 kilometre drive.

"Boonrod is fine. My mum gave him a bath after he arrived at his new home. He is friends with everybody in the house," he added. 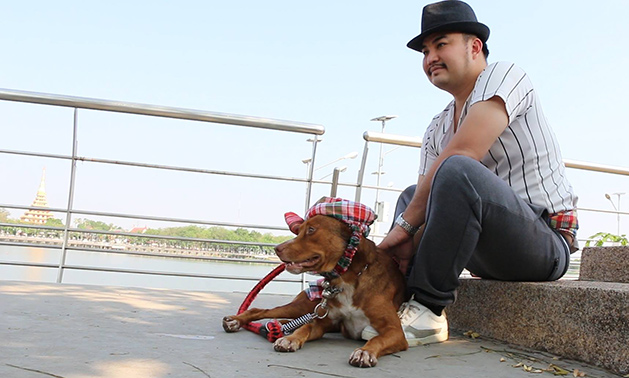 Mr Vitisak was the first person to climb down from the oil platform to help after the dog was spotted in the sea  and then pulled aboard on April 12. The platform is 220km offshore from Songkhla. The rescuers name the mystery dog "Boonrod", meaning survivor, and Mr Vitisak decided to adopt him as a pet.

The lucky canine's new owner took him for his first walk around Kaen Nakhon lake in Muang district on Monday morning, and he was greeted with enthusiasm by people there for their morning exercise.

"Boonrod, Boonrod," people called out his name as the dog and his owner walked by. One woman even  wrapped a pha khao ma cloth around his body - a traditional welcome in Isan.

Mr Vitisak said he will spend three weeks at home with his pet before going back to the platform in the Gulf. He thanked all those who provided help and support during the rescue, and stressed the need to allow Boonrod some privacy as he adapts to his new home.

"My desire is to see him live a normal life," he said. "I don't want to see him overexposed on TV shows. That would intrude on his privacy," he added.

He also posted a message on his Facebook account telling the dog's supporters to not be concerned the costs he had incurred. "I will take full responsibility for everything. Do not worry," he wrote.