His Majesty the King signs marriage registration documents while Queen Suthida looks on during a ceremony at the Dusit Palace on Wednesday. (Royal Household Bureau photo)

His Majesty King Maha Vajiralongkorn Bodindradebayavarangkun has announced his marriage to Gen Suthida Vajiralongkorn na Ayudhya, who is now known as Queen Suthida, according to a royal statement.

Since the marriage took place in line with the law and royal traditions, Queen Suthida is henceforth entitled to all the benefits of royal rank and status of the royal family, according to an announcement dated Wednesday and published in the Royal Gazette.

According to the palace TV pool news on Wednesday evening, the royal marriage registration took place at the Ampornsathan Throne Hall in the Dusit Palace at the auspicious time of 4.32pm. After the royal announcement was read, Queen Suthida gave flowers to His Majesty, who bestowed on her royal water, auspicious leaves to be placed above her ear and the highest royal decorations of his reign.

The chief of the Dusit district then brought the marriage registry for the royal couple to sign. Her Royal Highness Princess Maha Chakri Sirindhorn and Privy Councillor president and statesman Gen Prem Tinsulanonda subsequently signed as witnesses. 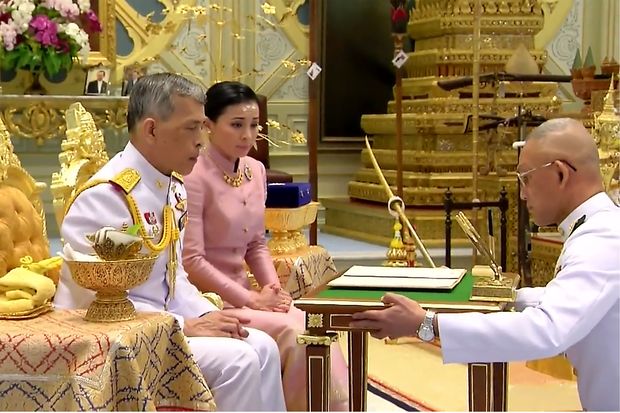 An official brings marriage registration documents for the royal couple to sign at the Dusit Palace in Bangkok on Wednesday. (Screenshot from palace TV pool news) 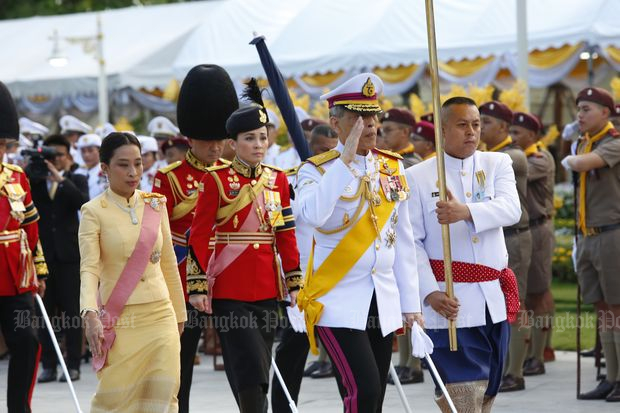 His Majesty the King, accompanied by then Gen Suthida and Her Royal Highness Princess Bajrakitiyabha, pays homage to the statue of King Rama I at the Memorial Bridge to mark Chakri Memorial Day on April 6. (Photo by Pattarapong Chatpattarasill)