His Majesty the King signs a marriage certificate as the newly-installed Queen Suthida looks on at Ambara Villa of Dusit Palace. photos courtesy of the Royal Household Bureau

His Majesty King Maha Vajiralongkorn Bodindradebayavarangkun has installed Gen Suthida Vajiralongkorn Na Ayutthaya as the Queen of Thailand, according to a royal announcement published in the Royal Gazette yesterday.

His Majesty the King legally married Gen Suthida earlier Wednesday afternoon, according to the announcement. The King later issued a royal command installing her as Queen Suthida, and accorded her royal rank and status.

Wednesday evening, all television channels broadcast the Royal Household Bureau's news about the installation of the Queen. At 4.32pm, His Majesty the King presided over a ceremony to install the Queen of Thailand at Ambara Villa in Dusit Palace. The King then had a royal palace official read a royal command installing Gen Suthida as Queen. 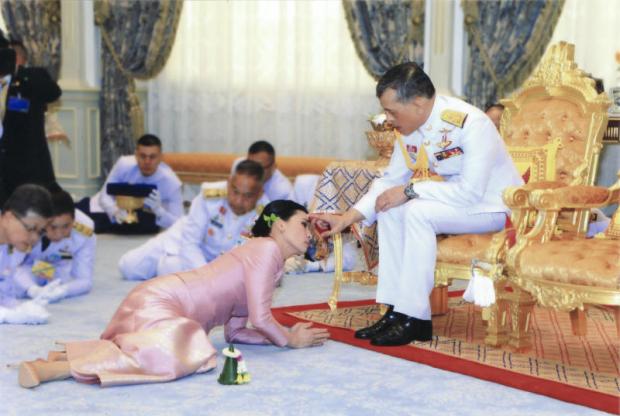 His Majesty the King anoints Queen Suthida's forehead with powder in a ceremony to install the Queen at Ambara Villa of Dusit Palace on Wednesday. The installation of the Queen comes before His Majesty's coronation ceremony which will take place between Saturday and Monday.

Afterwards, the King bestowed her with the royal decoration of the Most Illustrious Order of the Royal House of Chakri, the King Rama X's Royal Cypher Medal, and the royal command installing her as Queen. The chief of Bangkok's Dusit district had an audience with the King and presented a certificate of marriage registration for the pair to sign. Her Royal Highness Princess Maha Chakri Sirindhorn, and Privy Council president Prem Tinsulanonda signed as witnesses.

Prior to being named as Queen, Gen Suthida, 40, served as a deputy commander of the Royal Security Command. The coronation ceremony for His Majesty the King takes place this weekend.

1.8 tonnes of ganja seized in Korat