Officials of Kasetsart University hold a meeting to oppose the expressway project at the university in Bangkok last year. (Photo by Pattarapong Chatpattarasill)

The cabinet will be asked to approve a section of the northern expressway project between Kasetsart Intersection to Nawamin Road that has been delayed due to opposition from Kasetsart University, which raised concerns about the impact of the structure on its campus buildings.

"We are preparing our presentation for cabinet," said Sutthisak Wanthanawinit, the acting governor of the Expressway and Rapid Transit Authority of Thailand (Exat).

The construction of the 12.2-kilometre-long section known as N2, which will be connected to the Outer Ring Road in eastern Bangkok, will be financed by proceeds from the Thailand Future Fund (TFF) initial public offerings last year and is likely to cost 15 billion baht. 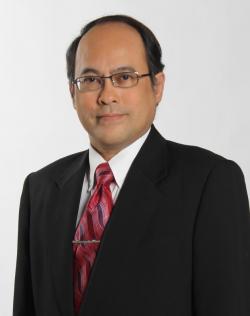 Once approved by the cabinet, officials will start work on a land acquisition plan to free up space along Kaset-Nawamin Road, said Mr Sutthisak. "We need a court ruling to push along the land acquisition process," he said.

Exat is currently in conflict with several landowners and businesses on Kaset-Nawamin Road. The agency recently filed a lawsuit against the firm which runs the well-known Talat Huamum Market, saying that the firm should not be allowed to run the business as its lease contract was scrapped by the government two years ago.

The lawsuit alleges the firm has continued to collect rent from vendors, without sharing a portion of the profits with the government as the owner of the premises.

Other businesses on Kaset-Nawamin Road -- lined by restaurants and shopping malls -- are expected to clash with Exat, as their premises might be acquired by the government to enable the construction of the N2 expressway.

The intersection adjacent to Kasetsart University has been particularly controversial, as a part of the university's compound will be used as an entry ramp to the expressway.

The university said in 2013 the expressway was built too close to its buildings. However, in 2016, the National Council for Peace and Order told officials to resume the project, citing a need to relieve traffic congestion on Kaset-Nawamin Road.

MANCHESTER: Manchester City retained the Premier League title in the most dramatic of fashion as they hauled themselves back from 2-0 down to beat Aston Villa 3-2 with three goals in the final 15 minutes on Sunday.

KABUL: Women television presenters on Afghanistan's leading news channels on Sunday vowed to speak up for their rights after being forced by Taliban authorities to cover their faces on air.