His Majesty the King is crowned during his coronation in the Grand Palace on Saturday. (TV Pool photo via Reuters)

His Majesty the King has officially been crowned the king of Thailand during the coronation ceremonies on Saturday and Queen Suthida was later declared Her Majesty the Queen.

His Majesty completed the ceremony after he was presented with the royal regalia which symbolise the kingship of a monarch who completes the coronation rite. Earlier, the king took part in a purification bathing rite in which he took a ceremonial bath with a shower of consecrated water and the royal anointment ceremony in which the King is anointed with coronation water.

After completing the kingship process, His Majesty designated Queen Suthida Her Majesty the Queen. Queen Suthida was named the new Queen on May 1 after his Majesty announced their marriage.

His Majesty said he would follow in the footsteps of King Bhumibol in dedicating his life for the happiness and well-being of the people. He vowed to carry on, preserve, develop and reign with righteousness for the benefits and happiness of his people.

The ceremony for kingship was held in the Grand Palace. 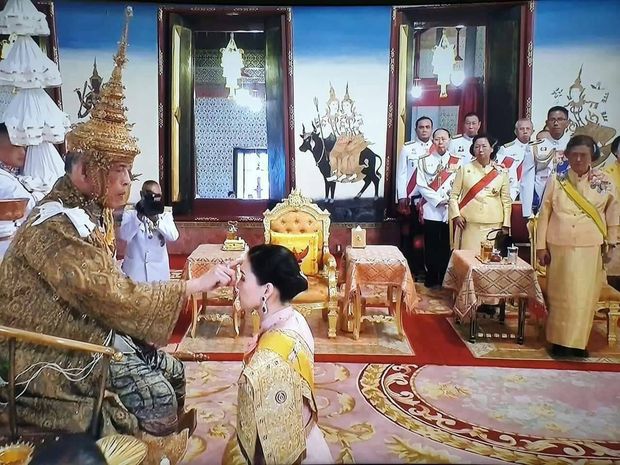 His Majesty the King anoints Queen Suthida during the ceremony in which she is designated Her Majesty the Queen at the Royal Palace on Saturday. (TV Pool photo)

The coronation for His Majesty was the first since the last event of King Bhumibol Adulyadej on May 5, 1950.

Soldiers also fired series of canon salutes to pay respect to Their Majesties during the morning session.

A lot of people flocked to the areas around the Grand Palace in the morning to witness the historic event.