A damaged Honda Jazz is found abandoned at the scene of a crash in which a man and woman and three children on a motorbike were killed, in Hua Sai district of Nakhon Si Thammarat.

NAKHON SI THAMMARAT: Police are hunting for a driver who fled after a car struck a motorcycle, killing all five family members riding on it, in Hua Sai district late Friday night.

Police, hospital staff and rescue workers who rushed to the scene found the wreckage of a Honda Jazz with Trang licence plates and a Honda motorcycle at the scene. The driver of the car had fled.

A man and three children were found dead at the scene. A woman who was badly hurt had been rushed to a hospital before police arrived. However, she was pronounced dead shortly later. All five were from the same family, said police.

Officers said Mr Chai was riding the motorycle with his wife and their children riding pillion when the bike was hit by a speeding car.

The force of the crash killed Mr Chai and the three children instantly, they said. 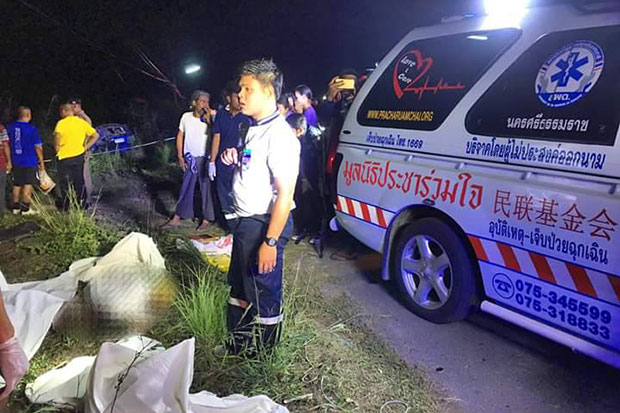 Rescue workers wrap the bodies of four family members who died at the scene of a crash in Hua Sai district of Nakhon Si Thammarat. The fifth victim was pronounced dead at a local hospital. (Photo by Nujaree Raekrun)