Udom Sirisorn,54, and his wife Daeng, 51, burst into tears and perform a wai after attending a religious ceremony at the Kalasin prison on Thursday to free them from jail following a royal pardon by His Majesty the King. (Photo by Yongyuth Phupangphet)

KALASIN: A mushroom-picking couple has been released from prison on a royal pardon by His Majesty the King.

Udom Sirisorn, 54, and his wife Daeng, 51, of Non Sa-ard village in Huai Mek district walked free from the Kalasin provincial prison on Thursday after serving two years of their five-year jail terms.

Prison chief Pattarapong Muaksakul said they were among 500 inmates released by royal pardons marking the coronation of the king.

On May 2, 2017, the Supreme Court reduced the prison sentences given the pair from 15 years to five years each for involvement in illegal logging.

They were arrested on July 12, 2010 after they rode their motorcycle to Dong Ranang National Park to collect wild mushrooms. In the same area, authorities were moving in on a group of illegal loggers, who got away. Mr Udom and Mrs Daeng also fled after hearing about the raid, leaving behind their motorcycle.

Officials found the bike and traced it back to the couple, who were apprehended soon after on charges of illegal logging. Forestry officials accused them of felling about 700 trees over a 72-rai area of the protected forest.

On Sept 26, 2011, the provincial court sentenced them to 30 years in jail. The sentences were halved after they confessed. They were released on bail and appealed the ruling. They insisted they had not felled any trees and had gone into the forest reserve solely to collect mushrooms. But authorities convinced the court they were "wood moths", a term referring to villagers hired to help illegal loggers.

The Appeal Court upheld their 15-year sentences and the Supreme Court reduced the senetence to five years. 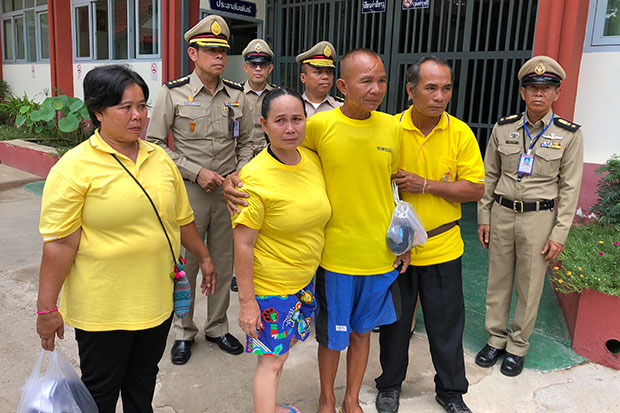 A mushroom-picking couple walk out of the Kalasin provincial court on Thursday following a royal pardon. (Photo by Yongyuth Phupuangphet)