Nithibet Yawut (inset), 24, allegedly admits to having beaten a 38-year-old karaoke bar waitress in Lampang and taken off her clothes in a fit of anger over her refusal to pay him 1,000 baht in unpaid debt for speed pills. He also dumped her bike in a reservoir in this northern province. (Photo by Aswin Wongnorkaew)

LAMPANG: A young man was caught for allegedly assaulting a karaoke bar woman, taking off her clothes and then dumping her motorcycle in a reservoir in Mae Mo district in a fit of anger over the woman’s refusal to pay him 1,000 baht for the sale of illicit drugs.

Earlier, a motorcycle was found in Huay Sai reservoir at Ban Huay King in Mae Mo district on Thursday. A local resident who found the vehicle alerted the village head of Ban Huay King, who immediately contacted police for fear the rider might have drowned.

Police later obtained the identification of the bike’s owner, who lived in the village. Her mother and relatives were later called in. All burst into tears as they thought she had drowned.

While rescue workers were preparing to search for the body in the reservoir, a bloodstained naked woman emerged from a nearby forest. The woman, 38, who claimed to be the bike’s owner, was given first aid before being sent to Lampang Hospital. A relative hugs a bloodstained naked woman who emerged from a nearby forest near a reservoir in Lampang where her motorcycle was dumped. (Photo by Awin Wongnorkaew)

A police investigation found Mr Nithibet had gone to a local karaoke shop where the woman worked as a waitress on Wednesday night. After the shop closed, the man, who apparently knew the woman, left with her to Huay Sai reservoir, about 500 metres away from the shop. The woman was later found naked with serious injuries on Thursday morning.

During the interrogation, Mr Nithibet, a native of tambon Sob Pad in Mae Mo district, allegedly confessed to having assaulted the 38-year-old waitress. He told police he went to drink at the shop on Wednesday night and demanded the woman repay 1,000 baht she allegedly owed him for some illicit drugs she had bought from him.

As the woman had not yet paid the money, he waited for her until the shop closed at around midnight. They then went to the nearby reservoir to drink beer. He said he again asked her to repay him but she refused and tried to leave.

Mr Nithibet said at this point he tried to stop her by pulling her arm but the woman hit him. The angry man then allegedly punched her, took off her clothes and hit her several times with a stick until she collapsed.  He then walked away.

Police said they would question both sides about the incident and look into the alleged sale of illicit drugs or speed pills. 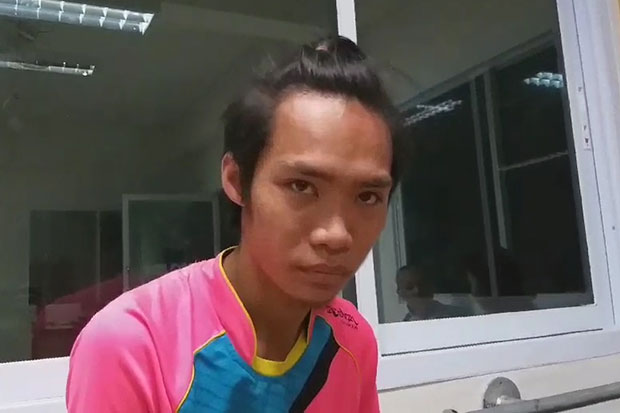 Nithibet Yawut, 24, is arrested on Friday for allegedly assaulting and stripping a karaoke bar woman near a reservoir in Mae Mo district, Lampang. (Photo by Aswin Wongnorkaew)