A Rohingya woman and her baby are seen detained in a police station after a fishing boat carrying more than sixty Rohingya refugees was found beached at Rawi island, part of Tarutao national park in the province of Satun, Thailand, bordering with Malaysia, June 12, 2019. (Reuters file photo)

The number of human trafficking victims rescued in Thailand is set to hit a record high this year, according to government data, with demand for cheap labour in neighbouring Malaysia causing a jump in the illegal trade.

Thai police have rescued 974 trafficking victims - mostly from Myanmar - for the year to date, compared to 622 for the whole of last year and a previous annual high of 982 in 2015, according to data released last week by the Thai government's anti-trafficking division.

Thailand has come under scrutiny in recent years for slavery and trafficking, especially in its seafood and sex industries.

The US State Department this year in its human trafficking report kept Thailand on a watchlist and criticised the Southeast Asian country for not doing enough to tackle the problem.

"There's a high possibility that figures this year will reach a record high, with many victims telling us they were planning to work in Malaysia," said Pol Col Mana Kleebsattabudh, deputy commander at the anti-trafficking division.

There are about 4.9 million migrants in Thailand, making up more than 10% of the country's workforce, according to the United Nations. Most are from poorer neighbouring countries including Myanmar, Cambodia, Laos and Vietnam.

Mr Mana said most of the rescued trafficking victims were recruited by middleman and agencies for 20,000-30,000 baht to work in factories in Malaysia.

Many were rescued while being transported towards the southern Thai border with Malaysia. 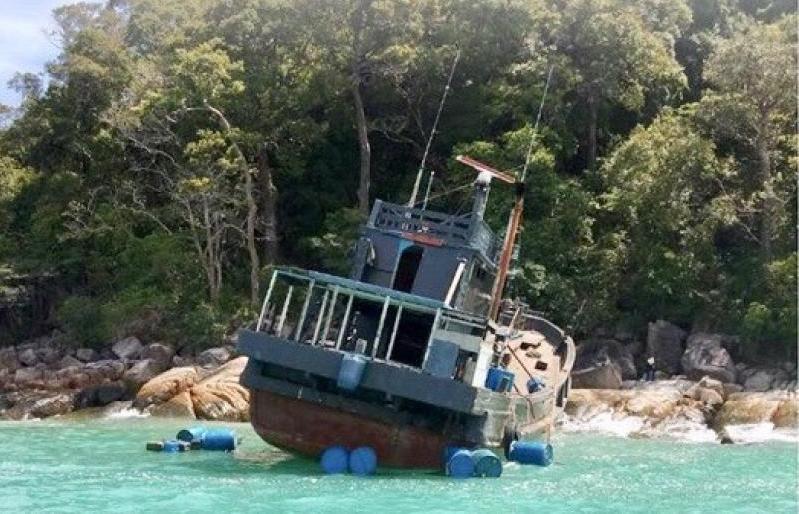 A fishing boat carrying at least 70 Rohingya Muslims was found stranded on the southern island of Koh Lipe on June 11. (Navy photo)

"What we find is these people are being kept in bad conditions in forests and shacks far from communities, which shows the bad intentions of those bringing them," Mr Mana told the Thomson Reuters Foundation on Friday.

"More importantly, the victims don't see themselves as being deceived and often endure the hardship in order to get to their destination."

Mr Mana said the spike in arrests could lead to an increase in smugglers and traffickers using alternative sea routes instead, which lowers the risk of being caught by authorities and is cheaper.

The most recent case by sea was on June 11, when a fishing boat carrying at least 70 Rohingya Muslims was found stranded on the southern island of Koh Lipe, said Mr Mana.

The boat had come from Bangladesh and had been at sea for two to three days before running out of oil and being swept away to the island, where two speedboats picked up some of the people, leaving 71 on the beach, he said.

"They slept on plastic sheets next to each other like animals. This is inhumane," he said of the cramped conditions.

Adisorn Kerdmongkol, a coordinator at the Migrant Working Group, a network of non-governmental organisations working on migrant workers' rights, questioned whether all those rescued by Thai police were trafficking victims or being smuggled.

Unlike trafficking, which is control over another person for the purpose of exploitation, smuggling is merely illegal entry into another country.