Fabric for cutting into monk’s robes is produced with recycled plastic strands woven into them. (Photos by Kowit Rachiwong)

Water bottles can be a lot more than just discarded items heading for the recycling plant, in light of their newfound religious value.

Thanks to the launch of a new public campaign, water bottles, along with other recyclable plastic containers normally thrown away as trash will be processed and made into robes for Buddhist monks.

The campaign calls for the donation of plastic bottles and containers as a way to make merit, which has struck a chord with many devotees, who want to keep on doing their part to nurture religion and preserve the environment.

The "command centre" of the project is Wat Chak Daeng in Phra Pradaeng district of Samut Prakan. The plastic containers are collected from company offices in Bangkok and delivered to the temple, where the bulk of the work begins. 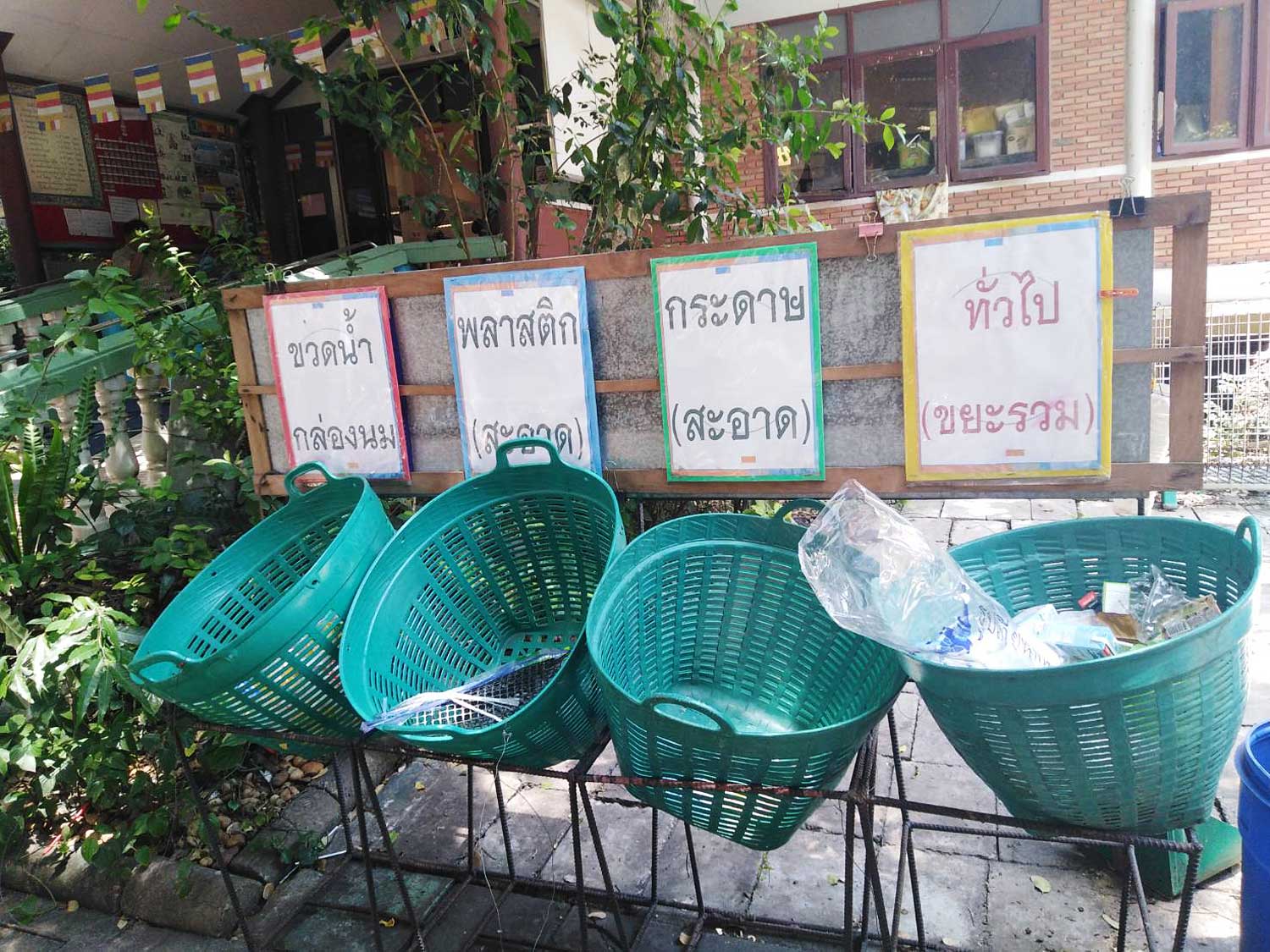 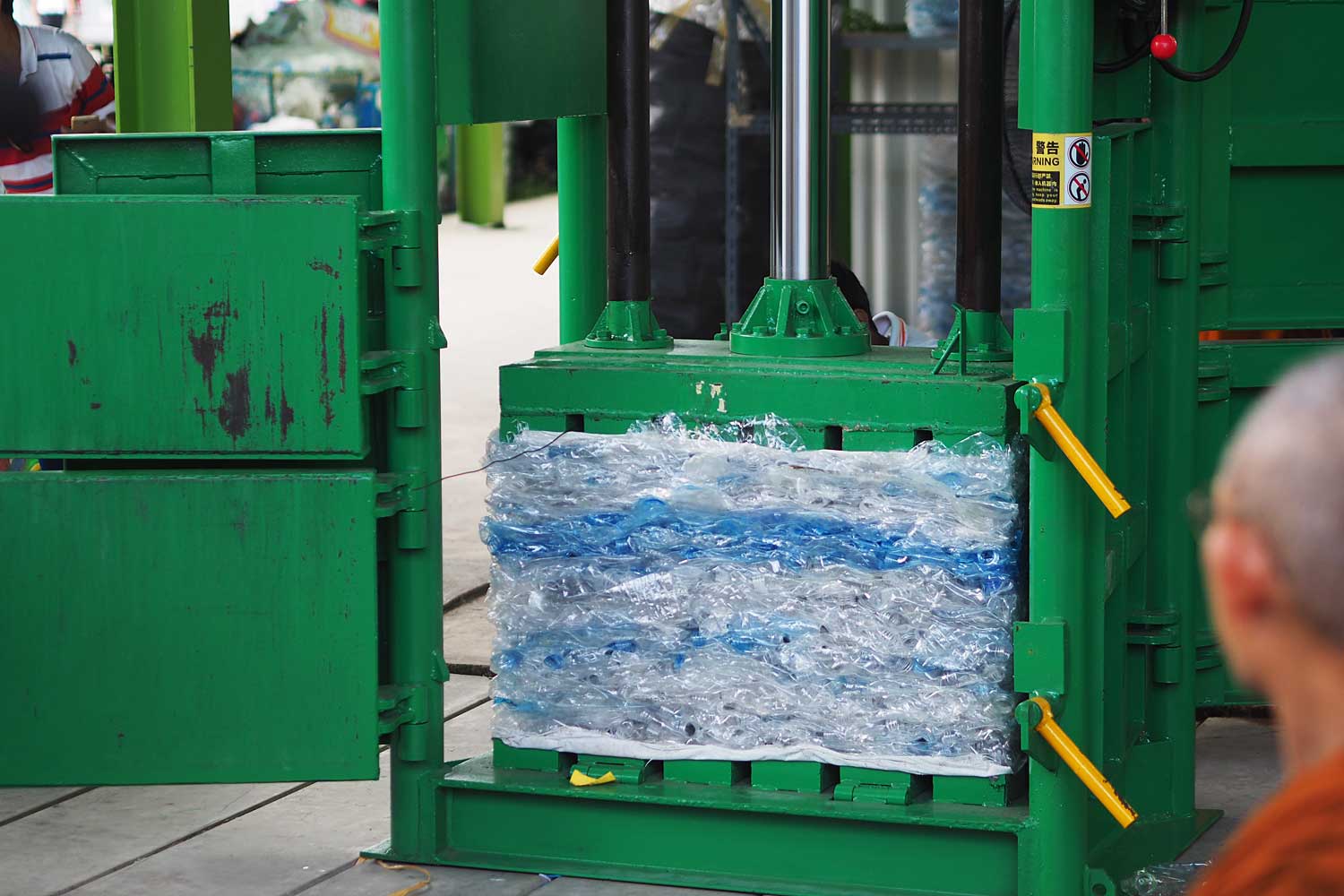 Baskets are provided for separating plastic garbage at Wat Chak Daeng in Phra Pradaeng district of Samut Prakan. The plastic bottles and containers are then crushed and pressed into blocks for processing into strands for producing fabrics.

The textile production process may sound simple but it requires meticulous selection of the raw materials. Only bottles made of polyethylene terephthalate (PET) can be used, which are then cleaned and pressed into blocks.

After that, the plastic blocks are trucked to a factory by the PTT Global Chemical Plc (PTTGC), which paid for the temple's plastic presser machine and provided an initial start-up fund worth 400,000 baht, according to Apichart Tonnamning, PTTGC's senior corporate social responsibility officer.

The factory operates the machines in order to "upcycle" products -- a process of converting old or discarded materials into new matter of better quality and environmental value.

The machines churn out fine polyester strands, which are combined with cotton and anti-bacterial polyester zinc to create a fabric that is then dyed yellow and is then ready to be cut into robes.

The factory then sells the cloth back to the temple, which cuts and assembles them into the final product. 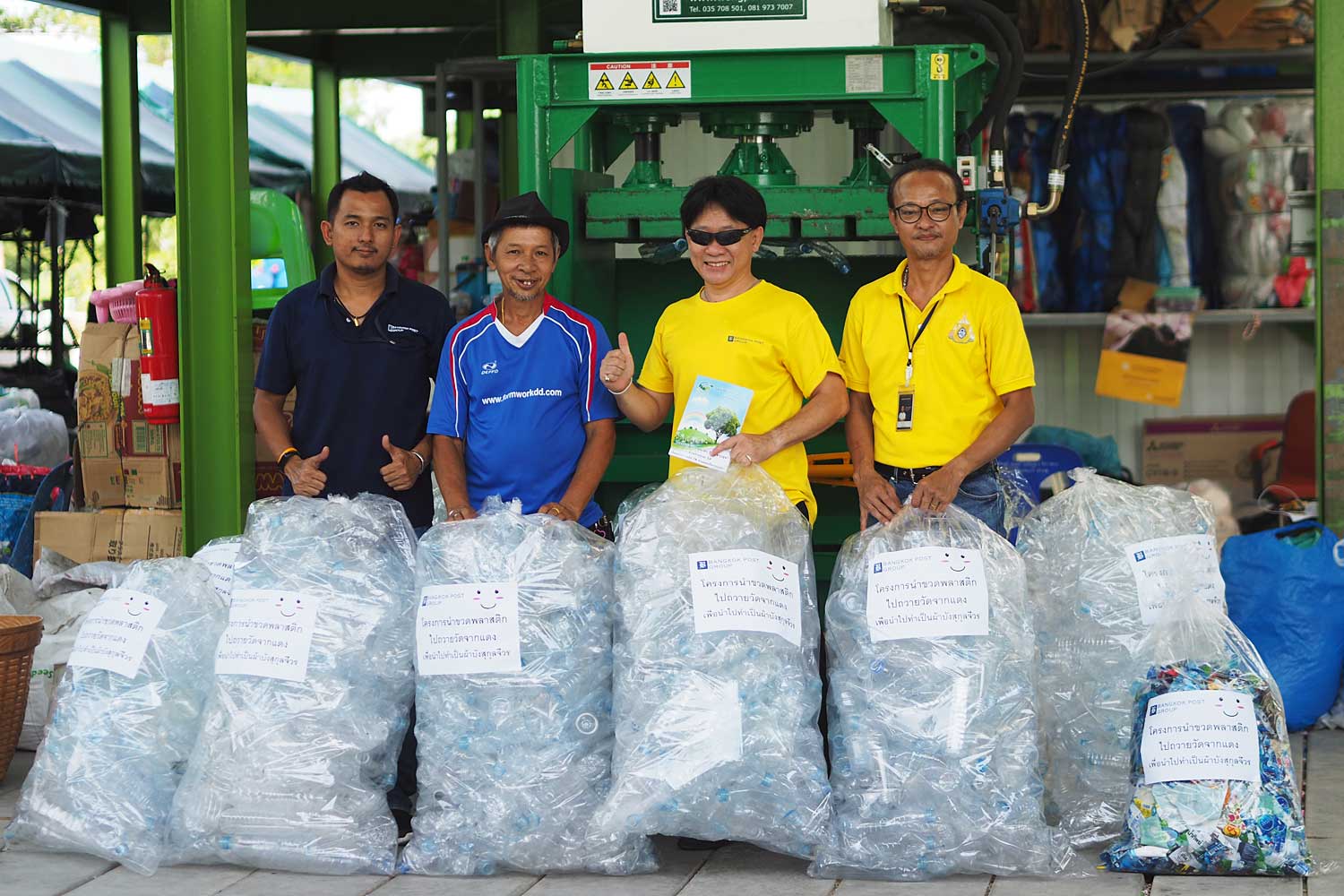 People from private companies bring their used bottles to be donated to the temple. The fabric, made partly of recyclable plastics, is tailored into monk’s robes by seamstresses who volunteer at the temple.

The new fabric does not trap moisture from perspiration, is comfortable to wear and dries quickly after washing.

The fabric is tailored into the main pieces of the robes; sangkati (cloth placed on the monk's shoulder), u-trasong (cloth enveloping the body) and antara wasok (the wrap-around). The three pieces together are called tri jeeworn.

The fabrics are sold in sets ranging in prices from 1,500 baht to 5,000 baht each. A set of tri jeeworn uses strands spun from 60 PET bottles, according to the campaign.

Proceeds from the sales go towards the Wat Chak Daeng Community Enterprise, which takes care of financial matters related to the robe production.

The profits are then used to invest in manufacturing the next batch of fabrics.

Mr Apichart said PTTGC "coaches" the leadership of the temple's enterprise, which is comprised of a panel of local community representatives. The company aims to impart guidance and advice that teaches members of the enterprise how to manage their own project, which also adheres to Buddhist values, with some profits made to sustain it in the long run.

The campaign, which launched a year ago, draws inspiration from the "Our Khung Bang Krachao" project, established by the Chaipattana Foundation initiated by His Majesty King Bhumibol Adulyadej The Great to conserve the vast green expanse known as Bang Krachao, dubbed "Bangkok's green lung".

The project puts temples at the centre of the community's environmental conservation efforts.

This model set the example for Wat Chak Daeng to follow. Back in 2015, the temple's deputy abbot, Phra Maha Pranom Dhammalangkaro, put together a clean-up activity to tackle garbage which was piling up in the temple compound.

As a result of the Phra Pranom's initiative, the temple changed its garbage disposal methods. For example, instead of burning leaves that have fallen from trees, which pollutes the air, they started gathering the leaves to make them into compost.

However, the plastic bags and containers in which people presented their alms to monks, were harder to dispose of. The deputy abbot did his research and came up with a method of extracting petrol and diesel oil from the plastic rubbish, without having to produce any toxic fumes. Devotees living in the neighbourhood invented a small machine to do the job, which "steamed" plastic with high heat to obtain the oil. However, 20 kilogrammes of plastic yielded less than a litre of oil.

The oil extraction project carried on for two years before it was scrapped. The project was not cost-effective although the intention behind it was not to reap profits but to present a non-polluting way to get rid of the garbage.

At the same time, the temple invested in the installation of solar cells, which helped cut down on the steep electricity bills.

With the donated plastic bottles no longer supplied for the operation to separate the oil, the deputy abbot turned to the robe fabric production, which is a "green" method of putting the discarded bottles to constructive use.

However, the production is labour intensive. The temple enlisted the help of volunteers from the local communities, who were entrusted with various duties, from scrubbing the bottles to rinsing them off and removing labels and caps, and sewing the yellow cloth.

Nirut Anathamsombat, a core member of the Wat Chak Daeng Community Enterprise and former owner of a robe factory, said that although the amounts of garbage which come through the temple may seem like a lot, there is not enough of it to keep up with the demand.

According to Mr Nirut, there is a long waiting list for the robes. Despite the rather high price tag, many are willing to pay for them on account of the fabric being of premium quality and its "intangible value", given that the profits will be donated to the temple and further Buddhist values.

"These robes matter a great deal more to the public sentiment than robes produced through conventional manufacturing processes, because they help curb global warming."

"The monk's robes made partly of recyclable materials represent an important textile creation which cuts back on the use of plastic," Mr Nirut said.

People are free to donate the bottles to the temple in-person or mail them in. If they live far away and have many bottles to donate, the temple will pick them up at their homes, he added.

But before donating, Mr Nirut said the bottles should be cleaned for easy processing.